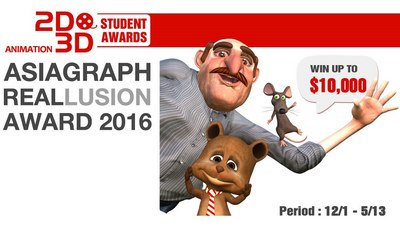 SAN JOSE, CA – Reallusion Inc, a real time 3D & 2D animation company, officially opened entries for the Reallusion Award 2016. The qualification round submission ends in May, and the finalists will be invited to Taiwan to participate in the final 48-Hours live contest. The event welcomes students from all around the world to join and win up to US$10,000 in cash prizes. The ASIAGRAPH Reallusion Award is well-known for its 48-Hours Live Animation contest, which has been running since 2013.

Reallusion's CEO Charles Chen commented, "We have been hosting this unique, global contest for 4 years. It has pioneered an instant animation trend with help from the latest real-time animation technology from iClone and CrazyTalk, which saves users up to 90% of time when creating an animated film from scratch."

The ASIAGRAPH Reallusion Award is one of the biggest activities for ASIAGRAPH, which started from 2010 and was greatly welcomed by professors and college students in China, Taiwan, Japan, Malaysia, Thailand, Indonesia and Thailand. Last year, it attracted 340 teams that participated in a qualification round, with 20 teams from 6 countries to enter the final contest. In 2016, Reallusion increased the award for the competition while opening it for students from all around the world. There are four categories for the contest which include; 2D & 3D animations for both school and University students.