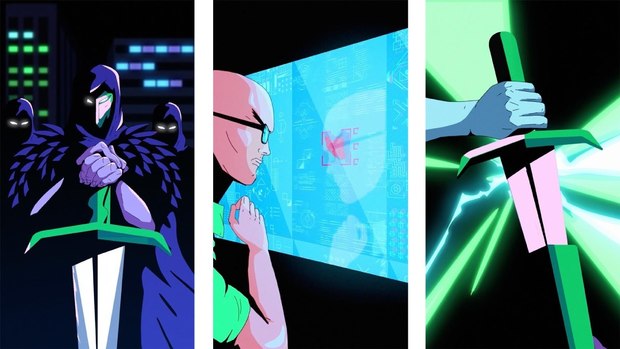 Entitled Guardian, the short film is designed to attract applicants for Siemens China’s Cyber Defense Center, which helps its customers protect themselves against an increasing volume of cybercriminals and hacker attacks. 2D animation is a new creative direction for Siemens in China and further demonstrates the rising demand for animation in the world’s second largest advertising market.

The insight for the unique and surprising approach came when Professor Wen Tang, Head of the Industrial Security Lab, met with R/GA Shanghai creatives and likened his department to the Night’s Watch, a military order in Game of Thrones that guards the Wall separating the Seven Kingdoms from the lands beyond.

“Our creative ambition was to tell a simple story to inspire those who are looking for a meaningful career to consider Siemens,” said R/GA Shanghai executive creative director Terence Leong. “It was Professor Tang who described the department as ‘guardians’ and that immediately sparked off the entire storyline.”

The 40mm vertical format film is made for WeChat, and is also accessible via a web link to a QR code that takes users to the app. Users can then experience the satisfaction of the job by playing a simple H5 game in which the objective is to debug hackers.

Brazilian animator and director Ariel Costa, aka BlinkMyBrain, is represented in Asia by Shanghai-based production company Final Frontier. Guardians is Costa’s debut film in China for and his first foray in to an anime aesthetic. “It’s not very often that a client comes to you with a playground, but that was the case with this project,” he explained. “We had so much fun designing the characters and it exciting to create a really dark universe where Cyber Security Officers fight hackers head on,” Leong said.

The project is the second high-profile collaboration between R/GA Shanghai and Final Frontier following the landmark “Road to HBL” campaign for Nike earlier this year.

“Once again Terence and his crew created an amazing brief, this time giving the world the opportunity to see Ariel Costa’s talent shining through with his first anime-style animation,” said Final Frontier executive producer Gustavo Karam.

“Working with Ariel and Final Frontier was an absolute pleasure, as always,” Leong added. “We still can’t believe the clients approved the script. But it takes a crazy partner like Final Frontier to trust and embrace a stupid idea like ours, and take it to the next level. I respect that.”

Costa also paid tribute to his creative partners, “I was lucky to be involved, and even more fortunate to have Terrence and his team as clients. They supported 100 percent of our vision and trusted our direction. We wouldn’t have been able to pull it off without Final Frontier. I couldn’t ask for sharper producers or more skilled artists with whom to collaborate.”