Network announces new season premiere date as part of summer slate reveal, though no official word on how star Jessica Walter’s passing will be handled. 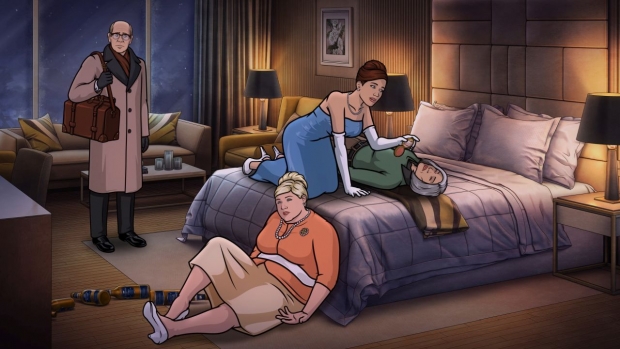 Season 12 of Archer, one of animation’s most dysfunctional, inappropriate, and hilarious ensemble comedies, will premiere with the first two of eight episodes on Wednesday, August 25, at 10 p.m. ET/PT on FXX, streaming the next day via FX on Hulu. The announcement was made as part of the network’s summer slate reveal.

Last October, FXX picked up Adam Reed and Matt Thompson’s hit animated spy spoof for a 2021 Season 12, noting Season 11’s 32% viewership increase across all platforms; critics rejoiced at the show’s return to a more familiar storyline and timeline based on absurdist spycrafting and interpersonal relationship mayhem.

It is unknown, however, how the show will officially is handling March’s passing of Jessica Walter, who voiced Malory Archer, the show’s acerbic, biting, and hilariously strident spymaster. In the FX release, she is listed as part of the Season 12 cast, so hopefully, we’ll get eight more chances to enjoy her fantastic work on the show. An award-winning actress, Walter was best known for playing Lucille Bluth on the brilliant TV comedy, Arrested Development, as well as the psychotic DJ Clint Eastwood stalker in Play Misty For Me. Nominated for an Emmy four times, she won once; her Archer work garnered two Annie Award nominations for voice acting. As the Bluth family matriarch, she was known for her snarky one-liners, searing side-eye, and bizarre approach to parenting. Much like her 12 years as Malory.

At the time of Walter’s passing, Reed told AWN, "The Archer family is heartbroken to lose Jessica Walter, our beloved colleague and friend.  Jessica was a consummate professional, an actor's actor, and the exact opposite of Malory Archer – warm, caring, and kind, with an absolutely cracking sense of humor – and it was both a privilege and a true honor to work with her over these many years. She will be greatly missed, but never forgotten." For Season 12, we know that Archer and gang face a new threat: a spy conglomerate known as IIA (International Intelligence Agency). With a limited number of spy jobs up for grabs, can the Agency compete against the soulless vultures of IIA, or will our mom-and-pop spy agency be the next to get swallowed alive?

This June 30, on Netflix, you’ll be able to catch Thompson’s other big project, the wild and hilariously wooly historically-adjacent animated comedy, America: The Motion Picture, which stars a chainsaw-wielding George Washington and his team of rabble rousers — including beer-loving bro Sam Adams, famed scientist Thomas Edison, acclaimed horseman Paul Revere, and a very pissed off Geronimo — looking to defeat Benedict Arnold and King James in the American Revolution. One thing we know for sure: these are not your father's Founding… uh, Fathers. No effing way!