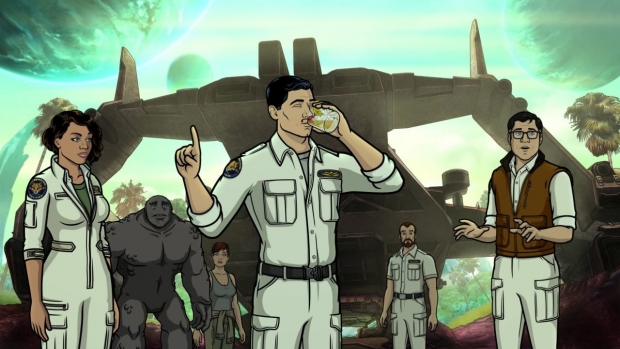 And…the wait continues! Season 11 of FXX’s animated comedy spy-spoof, Archer, is coming…later this year…at some point…TBD. Postponed from its originally scheduled May 6 premiere because of production delays in the face of the COVID-19 pandemic, Adam Reed’s raucous and dysfunctional work-place misadventure, one of the network’s most popular comedies, will soon share a bit of its planned Season 11 “phrasing!” at the upcoming virtual San Diego Comic-Con, now dubbed Comic-Con@Home.

Cast members Aisha Tyler, Chris Parnell, Judy Greer, Amber Nash and Lucky Yates, plus executive producer Casey Willis, will participate in a what should prove a lively online discussion and reveal of not-to-be-missed details about the new season. The panel will be available for everyone to watch on Comic-Con’s YouTube Channel at https://www.youtube.com/user/ComicCon.

If you recall, last year’s eight-episode Season 10 was set in the ambiguously dated “future” of 1999, on an interstellar salvage ship, the M/V Seamus, co-owned by the eternally bickering, now divorced Sterling Archer and Lana Kane. Billed as Archer: 1999, it boasted a collective dysfunction performed on a truly galactic scale. Highlighting the show’s all-new timeline and setting, Malory was a sentient, swirling orb-like energy ball that could materialize at will to pit everyone against each other or enjoy an adult beverage; Krieger, who we thought had reached the pinnacle of creepiness, was an even creepier cyborg; Ray, even in the confines of a spaceship, was still prone to melodrama, moisturizing masques and extreme fashion; Cheryl / Carol remained angry, bored and clueless, though was inexplicably the best fighter pilot in the galaxy; Cyril remained the embodiment of cowardice; and Pam… well, Pam continued her path of personal growth, reaching freakish size as a gender amorphous rock monster.