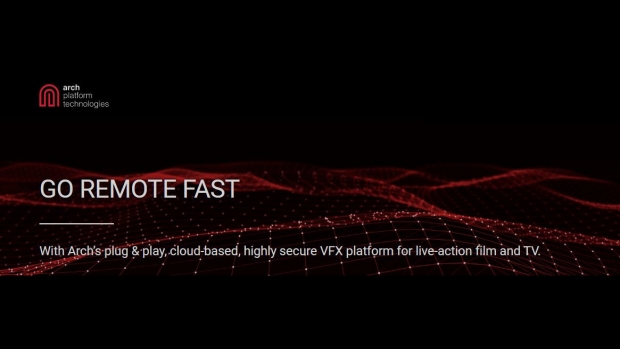 LOS ANGELES -- Arch Platform Technologies, a provider of cloud-based infrastructure for content creation, has announced the commercial availability of its secure, scalable, cloud-based visual effects (VFX) platform. The Arch platform is designed for movie studios, productions and VFX companies and enables them to leverage a powerful VFX infrastructure in the cloud from anywhere in the world.

By moving VFX to the cloud, the Arch platform eliminates the legacy costs and inefficiencies of on-premises machine rooms by empowering VFX teams to scale up and down quickly, anywhere in the world, and build and manage capacity with cloud-based workstations, render farms, storage and workflow management – all in a highly secure environment. It delivers high-end VFX for film and television productions, regardless of artist locations, and without upfront capital expense.

The company was founded in 2016 by VFX and technology executive Guy Botham to create a cloud infrastructure for Vitality VFX with the purpose of avoiding the capital expense of establishing a machine room, while maintaining sufficient capacity to grow into a mid-size studio. Botham enlisted CTO Edward Churchward, a cloud computing expert, to design the Arch platform, which was subsequently used to provide VFX for Warner Brothers, Disney, Fox, Sony, and Netflix.

Recently, Solstice Studios, a Hollywood distribution and production studio, leveraged the Arch platform for the VFX work on the studio’s upcoming first movie, Unhinged. The platform has also been used by VFX companies Track VFX and Fat Belly VFX and is now commercially available to the industry.

“We knew early on that cloud-based computing could be a potential solution to enable flexibility to scale up and down based on demand, but that no one had yet applied it to VFX operations,” commented Botham. “To that end, we engineered a robust Infrastructure as a Service (IaaS), which now enables a group of VFX artists to collaborate on the same infrastructure as if they were using an on-premises system. Networked workstations can be added in minutes, nearly anywhere in the world, including at an artist’s home, to create a small to large VFX studio environment, running all the industry standard software and plugins.”

“We believe the Arch platform is a game changer for the global VFX industry — enabling productivity, flexibility and therefore material savings, untethered from the traditional office environment,” adding Botham.

“The flexibility in which Arch allows us to scale our business is phenomenal,” commented Track VFX co-founder, Joel Sevilla. “Adding workstations to our pipeline is simple and fast. By building our workflow on the Arch platform from the onset of our company, our initial capital investment in hardware was literally erased. We were able to use that capital to grow our business.”

“Arch is scaling rapidly to provide the solution for the immediate industry requirements,” remarked Arch Platform Technologies CEO, Laura Teodosio. “We’re right at the intersection of film, VFX and technology, and our platform allows the creative industry to scale without constraints. We’re excited to build upon the success we’ve had with studios and VFX companies, and to bring the next iteration of the Arch platform to a wider audience.”

Botham, who also founded Vitality VFX, is a film entrepreneur and film and technology executive. His credits include Wonder Woman, Avatar, The Social Network, Benjamin Button, Wolverine, The Avengers and The Revenant. Churchward has deep experience utilizing new technologies to spearhead the transformation of film production and distribution. Teodosio is an experienced software entrepreneur, engineer and film producer who has worked extensively at the intersection of technology and entertainment and has been brought on to oversee the next phase of growth.