New and returning series coming to the streamer's lineup include ‘Sago Mini Friends,’ ‘Slumberkins’, ‘Interrupting Chicken’ and more classics with the Peanuts gang from Mendelson/Melendez Productions and Peanuts Worldwide. 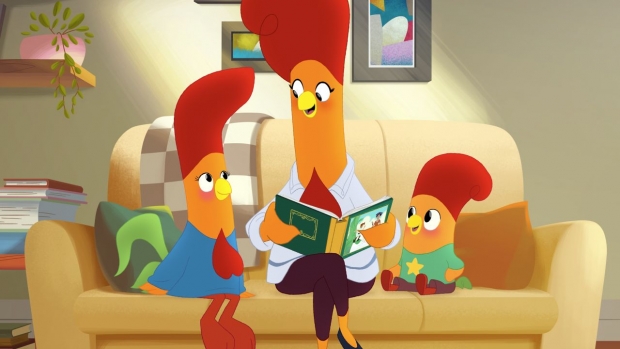 Apple TV+ has announced its fall animation slate for kids and families, including the new original series Sago Mini Friends, Slumberkins, Circuit Breakers, and Interrupting Chicken; the return of Wolfboy and the Everything Factory, and Get Rolling with Otis. The lineup also includes a newly available set of classics featuring the Peanuts gang in Peanuts Anthology II. The new preschool animated series produced by Daytime Emmy Award-nominated Spin Master Entertainment and animated by 9 Story Media Group’s Emmy Award-winning studio Brown Bag Films - Toronto, is based on the characters and artful designs in the award-winning Sago Mini World app, developed by Sago Mini. The series is an adorable nod to gratitude, featuring Harvey, the floppy-eared dog, and his best friends, Jinja the cat, Jack, the rabbit, and Robin, the bird, with a cast of colorful residents. In each episode, Harvey and his friends express their true thankfulness for all things, big and small, through optimism, kindness, preschool-friendly humor, and original songs! Wolfboy and the Everything Factory - Season 2

Season 2 of the 2D animated series takes Wolfboy (voiced by Kassian Akhtar) to a new realm underneath the Everything Factory which is responsible for all the destruction in the universe. With his Spryte friends and new allies, Wolfboy engages in a quest to unite the forces of creation and destruction and realizes that being different is what makes him special - and ultimately, it’s the oddballs and dreamers who change the world. Get Rolling with Otis - Season 2

Based on the Penguin Random House book series by Loren Long, the animated adventure series from 9 Story Media Group and Brown Bag Films welcomes young viewers to Long Hill Dairy Farm, home to Otis the tractor and all his friends. Otis may be little, but he has a big heart. Whenever he sees a friend in need, he hits the brakes, asks how they're feeling, and rolls into action to help! The new season features new adventures, new friends, and a little tractor who’s big on helping others.

The new mixed media puppet / 2D animation series from The Jim Henson Company follow adventures with Bigfoot, Unicorn, Sloth, Yak, and Fox as they explore a world of feelings that empower the emotional wellness of children through supportive storytelling. In addition, the series brings to life some of the characters from the “Slumberkins” books which explore new stories of friendship, confidence, and connection to model healthy relationships.

Created for television and executive produced by Alex Rockwell (Word Party, Pajanimals) along with The Jim Henson Company’s Halle Stanford. Callie Christensen, MIT in Elementary Education and Special Education, and Kelly Oriard, M.S. in Counseling and Marriage Therapy & School Counseling, creators of the Slumberkins education brand, are co-executive producers. Dr. Dan Siegel, executive director of the Mindsight Institute and clinical professor of Psychiatry at the UCLA School of Medicine and the founding co-director of the Mindful Awareness Research Center at UCLA, and author of multiple New York Times bestsellers serves as an expert in understanding how attachment experiences affect behavior through the Apple TV+ changemaker initiative.

The animated preschool series, based on the 2011 Caldecott Honor-winning book series written and illustrated by David Ezra Stein, introduces children to the joy of creative writing.

It all starts with a young little chicken named Piper who has a habit of interrupting story time! Every time Piper hears a story, she can’t help but jump in, ask questions, and let her imagination run wild as she tries to fill in details, guess what happens next or insert herself in the middle of the action to help save the day.

The series is developed by Emmy Award winner Ron Holsey who serves as executive producer. The show is produced in partnership with Mercury Filmworks and features the voice talents of three-time Emmy Award winner Sterling K. Brown (This Is Us, Honk for Jesus. Save Your Soul). It is executive produced by Holsey Stein; Loris Kramer Lunsford; Clint Eland; and Chantal Ling. In addition, Dr. Lucy Calkins, Founding Director of the Teachers College Reading and Writing Project and the Richard Robinson Professor of Children’s Literature at Teachers College, Columbia University, serves as the reading and writing expert through the Apple TV+ changemaker initiative.