Director Leo Matsuda and producer Sean Lurie delight crowd with amusing notes about the making of their new Disney short. 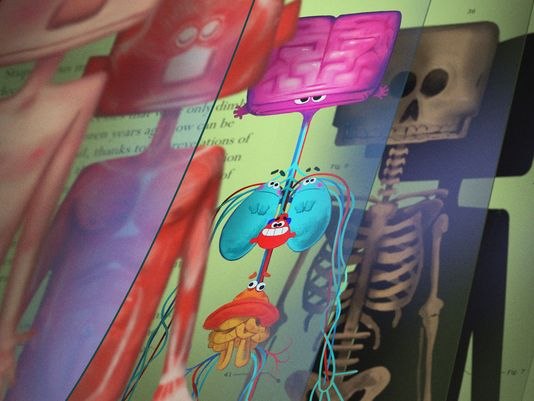 To the cheering delight of the standing room-only Annecy Festival crowd, and as a teaser to a special footage presentation by directors Ron Clements and John Musker of their next film, Moana, director Leo Matsuda and producer Sean Lurie presented the world premiere screening of their bran- new animated short, Inner Workings.

Finished just last week, the 6-minute, 23-second short captures the zany collision between a man’s logical, pragmatic side and his free-spirited fun loving side. Set for release fronting Moana this coming November 23rd, Inner Workings blends CG and traditional hand-drawn animation in its exploration of how to find balance in life. According to Matsuda, who is of Japanese-Brazilian decent, the film mirrors his own life in many ways. A child of the 80s who grew up without the Internet, Matsuda’s family got a new copy of the Encyclopedia Britannica ever year. He loved these books, especially the sections depicting layers of the human body. “I have the Japanese side of me. It’s very disciplined and logical,” he says. “And I also have the Brazilian side, which loves Carnival and parties. It’s like there’s a civil war going on in my body.”

The director cited famous directors Jacques Tati and Wes Anderson as cinematic influences on the short, noting how their style makes the audience feel as if they’re in a play. He also shared how after a fruitless attempt to design the leading character, he decided to base the look on himself.

Matsuda’s idea was selected from 73 short film pitches. A story artist on Zootopia as well as Big Hero 6, Matsuda was nominated for an Annie Award for outstanding achievement in animated feature film storyboarding on Wreck-It Ralph. Lurie, a 10-year Disney veteran, started at DisneyToon Studios, where he produced Tinker Bell and the Lost Treasure before being promoted to vice president of production in 2010, where he oversaw production of films in both the Planes and Tinker Bell franchises. In 2014, Lurie moved over to Walt Disney Animation Studios as vice president of development. He served in studio leadership for Big Hero 6 and Zootopia, as well as the upcoming Moana, in addition to producing the new short.