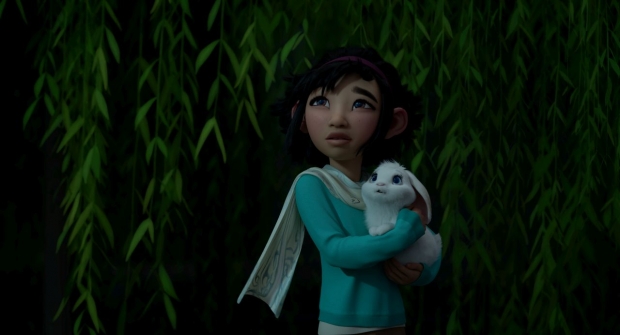 Annecy 2020 Online has just added Oscar-winning director Glen Keane and Pearl Studios’ new animated music adventure, Over the Moon, as their final Work in Progress presentation.  Festivalgoers will get to see a behind-the-scenes look at the highly anticipated production that teamed Keane and producer Peilin Chou (Abominable) again more than 20 years after they’d last worked together at Disney developing Rapunzel, which ultimately became the hit animated film, Tangled.  A live Q&A with the filmmakers is scheduled for June 24 at 6:00 pm CET; you can register and watch it here.

The Work in Progress presentation features the following speakers:

In the film, Fei Fei, a bright young girl fueled with determination and a passion for science, builds a rocket ship to the moon to prove the existence of a legendary Moon Goddess. There she ends up on an unexpected quest, and discovers a whimsical land of fantastical creatures.  In the trailer we meet our feisty heroine, whose unyielding quest to build a rocket and prove the Moon Goddess is not just a silly myth puts her on course for a miraculous journey no one could have predicted. Check out the just released trailer!

Netflix will release Over the Moon this fall worldwide, except for China; Pearl Studios will handle distribution in the Middle Kingdom.