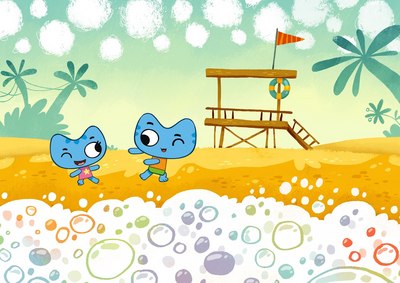 ROUBAIX, FRANCE -- During the past two months, Ankama Animations has had discussions with several business partners regarding the sales of the animated preschool series, Kit & Kate. The series, produced by Toonbox Animation Studio, has been picked up by EBS (South-Korea) for its TV channel, by ICFLIX for its SVOD platform in all MENA countries, and by The Walt Disney Company Australia for Disney Junior Australia & New Zealand. Some other deals are currently under discussion with broadcasters.

Kit & Kate depicts the adventures of two cute kittens who learn how to make good choices while having fun in their playroom. Each time they jump in their magical toy chest, their imaginations transform the playroom into colorful worlds where their games make them experience the consequences of good and bad choices. With the help of their parents, Kit & Kate always end up learning how to make the good decision, and find a happy ending to their journey.

The series is part of a transmedia project including apps for tablets and mobile phones, physical and digital books, online videos. Ankama Animations is also looking for licensing partners for that IP in EMEA and APAC regions.