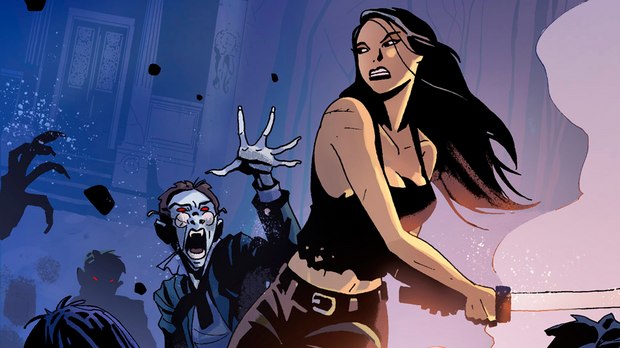 Animator Stephan Franck has turned to Kickstarter to fund publication of the final volume in his ‘Silver’ graphic novel series.

Animation veteran Stephan Franck, whose credits include The Iron Giant, How to Train Your Dragon and Despicable Me, is turning to Kickstarter to finance publication of the fourth and final volume in his award-winning graphic novel series, Silver.

Written, drawn and self-published over the past four years by Franck, Silver is a globe-trotting tale that picks up 30 years after Professor Abraham Van Helsing visited Dracula’s castle in Bram Stoker’s acclaimed novel. Now Van Helsing’s descendent, the mysterious vampire hunter Rosalyn, is teaming up with a ragtag group of con men for a high stakes heist to rob Europe’s richest vampires.

“My hope is that fans who love old-fashioned storytelling that’s chock full of action and adventure, mystery and humor, discover Silver in time to be a part of the epic finale,” says Franck, who has published the first three volumes of Silver and a related stand-along graphic novel titled Rosalynd through his Dark Planet Comics banner.

The series has attracted praise from top comic-book creators, including Tim Sale, Bill Sienkiewicz and Jim Lee, and has been widely praised with coverage from NPR, The Nerdist, Horror News Network, Newsarama and Comicon. It also earned Franck a Russ Manning Award at Comic-Con International: San Diego 2014, a 2015 Geekie Awards nomination for best graphic novel, and landed on ComiXology Submit’s Essential Reads list.

When not making comics, Franck is an executive producer and head of story for the Playmobil Movie for Lionsgate. Franck also co-created the award-winning animated TV Series Corneil & Bernie (Nicktoons, Hub Network), and received an Annie Award nomination for best director for a TV program for the special Smurfs: The Legend of Smurfy Hollow.

If funded through Kickstarter, pledges will be delivered to backers this fall. The Silver, Vol. 4, Kickstarter campaign is live runs to 9 a.m. PDT on June 28.