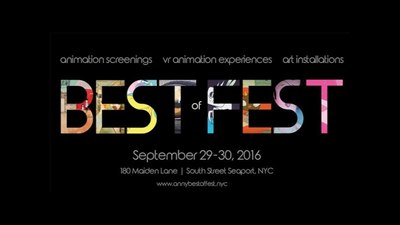 NEW YORK – Animation Nights New York began as a screening and networking event in September of 2015 and will now mark its one-year anniversary with a two-day festival. Animation Nights has attracted 2500 international submissions of animated short films. The caliber of the screened work is on par with any animation festival and the screenings have earned an audience of over 500 people attending monthly. Their overall community has grown to over 3000 and continues to increase. People of all ages, nationalities, and backgrounds are coming together at 180 Maiden Lane in the Seaport District for the love of ANIMATION.

Twenty films have been selected to be featured at the Animation Nights first, chosen from the 200 shorts screened at monthly curated events. In addition to the animation screenings, VR Animation Experiences, Professional Panels, Art Installations, Artist Booths and other industry events will be featured at 180 Maiden Lane and other locations around the South Street Seaport area of NYC. The Best of Fest filmmakers will receive one year subscriptions to both Craft and Stash. Our Animation for Adults award winner will receive a gift from Wacom.