Special event for guild members brought together Floyd Norman, Willie Ito, Jane Baer and Enid Denbo-Wizig for a candid discussion about their career triumphs in the face of significant adversity. 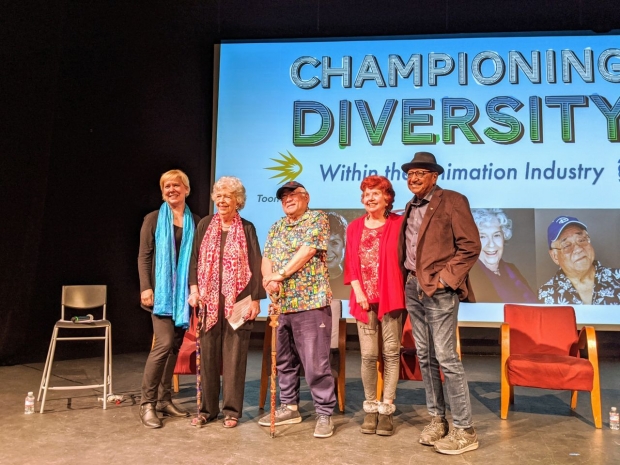 This past Wednesday, at the Colony Theatre in Burbank, members of the Animation Guild were treated to a panel discussion with animation luminaries Floyd Norman, Willie Ito, Jane Baer, and Enid Denbo-Wizig. Moderated by author and Academy scholar Mindy Johnson, and presented by The Animation Guild and Toon Boom, the panel, “Championing Diversity Within the Animation Industry”  provided a historical overview of diverse groups’ roles in animation, from early pioneers in the LGBTQ+ community to Latin American artists, as well as the impact of immigrants from all over Europe, stressing that strength often lies in differences and not in similarities. The four panelists then shared their journeys in the animation industry, describing how they overcame personal obstacles, such as ageism, sexism, cultural taboos and racist incarceration, to achieve successful careers.

Jane Baer spoke about how her family only had enough money to finance one child’s higher education; the prevailing attitude at the time was that education would be wasted on a girl who would ultimately get married and have babies, so it was her brother who was sent to university. Baer had to work her way through Art Center on her own, but ran out of money and had to find work. Luckily, she landed a job at Disney, working with the nine old men of animation.  Later, she would go on to create the Baer Animation Studio with her then husband.

Floyd Norman described growing up African American in the protective bubble of Santa Barbara, where as a child he had no sense of segregation. After attending Art Center, he found work with a diverse group of people at Disney and it was Walt Disney himself who helped advance Norman’s career. At age 65, Norman did run into ageism – an issue that deserves more scrutiny - when suddenly there was no more work for him and he was let go from Disney. Despite that hiccup, Norman then went on to do pioneering work at Pixar and is more recently the subject of Floyd Norman – An Animated Life, which will air on TCM. December 7, 1941 is forever etched in Willie Ito’s memory. Ito shared how the events of that day ultimately led to his family’s incarceration at an internment camp in Utah. Despite his bleak reality, at age five he would draw figures in the margins of Sears Roebuck catalogues and create his first flip books. Later, when his peers from the internment camp were becoming engineers and doctors, a concerned Ito wondered about his decision to become a cartoonist. Feeling that peer pressure, Ito told his mentor and life-drawing instructor that he was considering doing something more substantial, like medical illustration. His mentor immediately set about helping Ito get a scholarship to Chouinard to become a cartoonist.

When Enid Denbig-Wizig lost her hearing due to illness as an infant, her mother refused to accept she was deaf and convinced herself that her daughter was hard of hearing. Determined that her daughter be part of the world, she sent her to a school for the deaf at age seven, where she learned to read lips and speak. Denbig-Wizig then went to private speech therapy twice a day, five days a week, for five years with a therapist who wanted her to “speak like the queen.” Denbig-Wizig went on to work at Schlesinger Studio, starting at the bottom in painting and becoming one of only three women in the animation unit at the time. She is an inspiration for the deaf community where she still volunteers to this day.