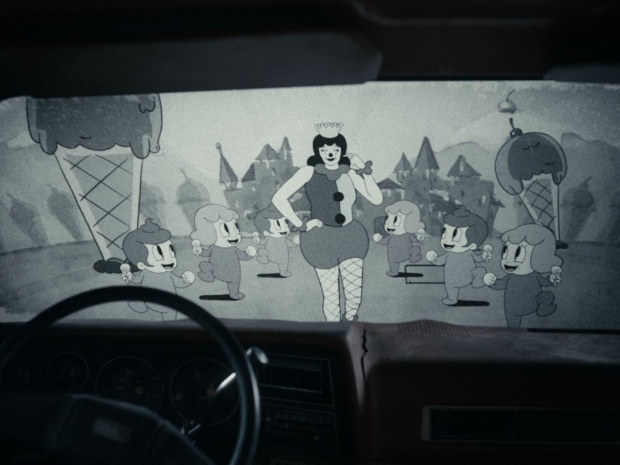 A road trip to meet the parents becomes an exploration of reality and altered perception in I’m Thinking of Ending Things. Jesse Plemons (The Irishman, El Camino) plays boyfriend Jake, who takes his new girlfriend, played by Jessie Buckley (Wild Rose), to meet his parents. That is where the “normal” part of the plot ends. Throughout the film, Academy Award-winning director Charlie Kaufman (Eternal Sunshine of the Spotless Mind, Anomalisa) plays with time, memory, and reality to create an uncanny, tightly wound metaphysical thriller that makes you wonder how much your own views shape the reality around you.

The film, adapted from the novel by Iain Reid, explores regret, longing, and the fragility of the human spirit. Kaufman was influenced by the absurdism of Harold Pinter, Samuel Beckett and Eugene Ionesco, using the canvas of a traditional relationship to paint a jarring commentary of romantic partnerships. Anthony Bregman, who has been producing films with Kaufman for 20 years, states, “What’s cinematic about the book, and the movie, is that it’s about brain time, our perception of reality, and how we understand what we see, and relate it to something that’s happening in the real world. You’re not only trying to track these characters and what’s going on between them, but over the course of the movie, you’re also trying to figure out what’s real, what’s imagined and what’s remembered. The representation of reality and the representation of memory and imagination are hard to distinguish, and the movie makes great play of that.”

*** Mild spoiler alert – the ending of the film is discussed below

The unique thrill ride reaches a pinnacle in the last few minutes, when the firmly rooted live-action film transition into animation. The sequence, an ice cream commercial featuring a transparent pig, was produced by Academy Award nominee Rosa Tran, who had previously paired with Kaufman on his 2015 Oscar-nominated stop-motion animated film, Anomalisa. The veteran animation producer began her career in animation on the Emmy Award-winning series, Robot Chicken, and is currently a co-executive producer on the hilarious animated series, Final Space. She is also executive producing on a new half-hour adult animated comedy series just greenlit by HBO Max, Santa Inc., starring Sarah Silverman and Seth Rogen.

The film’s animated pig sequence, also produced by Tran, was complicated as well. “The script was written for an actual pig to walk down a hall, turn its head and talk to a man,” said Kaufman. “But it turned out that pigs cannot turn their heads, and they get panicky on slippery surfaces. So, we were not going to be able to film a pig doing a slow, meditative walk down a school hallway.” Kaufman reached out to Tran, and the rest, as they say, is history. “Charlie called and said, ‘Can you guys animate a pig’?” she explains. “He sent over watercolor images and took time describing to us what’s happening in the scene.”

“Working in animation, multiple versions go back and forth until you establish the look,” she continues. “The pig is comprised of about seven different layers – the base pink layer, shadows, highlights, balloons, eyes – everything is on a separate layer. We toggle between working with the artist and then once it finally gets down to the comp department, working with the VFX department.” In chatting with Tran about her process, she shed some light on the truly bizarre ending to the film. “Charlie was a big fan of the old timey Dairy Queen ads,” she notes. “He showed us those and he also gave us fine art references. I remember him saying that he wanted the clown to look a bit sexy and he gave these reference images for lady clowns from the 1900s.”

Once a vision was established, the animated short was created pretty quickly; Tran shares it was “first started in April of 2019 and we delivered the final shots in December of 2019.” The live-action shoots and animation happened simultaneously. “What’s kind of amazing about this was that they were shooting in NY and we did all the animation here in LA,” she adds. “By the time Charlie talked to us about the animation, they were well underway with the movie. Since the animation was an element of the shot, it was great that they were already shooting and gave us ref footage and clean plates.” The animation team was comprised of Simon Wilches-Castro for the Tulsey spot along with Yuan-Li Chao to assist. For the pig, Tran had Mollie Ong along with Rafael Mejia to assist, with VFX artist Derek Smith coming on at the end to help bring the project home. The dream team still experienced some challenges, however. According to Tran, “[We had] the usual challenges of time and money, but we produced this all remote before WFH was in place and that was tough workflow to get through. New people, new style, project already shot. There was one point where it looked like the pig animation was so far behind schedule, so we went all hands-on deck to help Mollie.”

Trans reveals that Ong was able to achieve the look of the pig “by hand painting individual layers on paper. So, you had the pink base layer, you had the spots layer, you had the highlights layer; for the eyes and mouth at one point she was up to eight layers for one shot and then each layer had to be scanned and comped. But when you’re working alone and remote, it’s hard to make the animation and then troubleshoot tech and everything else.” Prepare yourself mentally and keep an eye out for Tran’s eye-catching animated sequences, when you watch I’m Thinking of Ending Things, released globally today on Netflix.