Writer, director, and animator Nicolás P. Villarreal brings the famed artist to San Francisco via an outdoor mural to explore the ‘shapes’ of his vision; his seven-minute award-winning 2D animated film celebrates the structure and discipline needed to achieve our dreams. 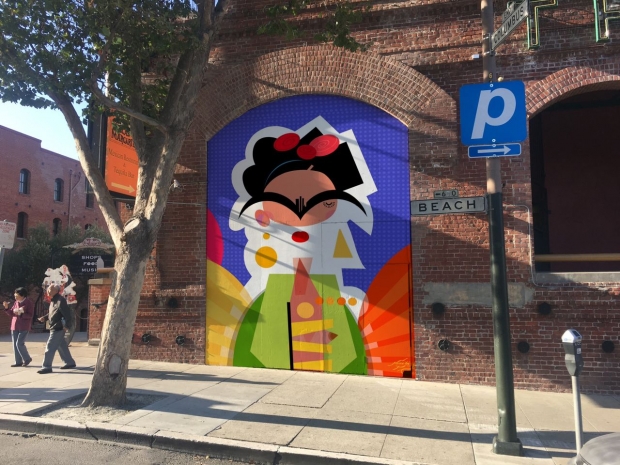 Inspiration, vision come together in in so many ways. Recently AWN shared the story behind the captivating animated short On/Off. The seven-minute, Oscar-qualified 2D film by writer, director and animator Nicolás P. Villarreal celebrates the structure, discipline, and focus needed to achieve our dreams.

Villarreal had been nursing the idea of how creatives like Leonardo da Vinci, Ludwig van Beethoven, Nikola Tesla, and Frida Kahlo would react to modern technology. Eventually, the premise of On/Off began to take shape. To explore the literal “shapes” of his developing vision, he painted a mural of Frida Khalo in San Francisco.

“I painted the mural of Frida in San Francisco where I teach,” shares Villarreal. “It took me 3 days to complete and it's around 25 by 20 feet. It was an initial exploration for my film On/Off and the style inspiration.”

On/Off is illustrated entirely in colorful, abstract shapes - including the character design – and has won over 300 international awards; the film was produced at Red Clover Studios, co-founded by Villarreal, where the animator wrote and directed his other award-winning animated short films Pasteurized and Nieta.

Currently, Villarreal is also working on his first animated feature, The Aces, which he describes as “Alice in Wonderland meets The Three Musketeers.” Animation production is set to commence this coming March with a release date still to be decided.