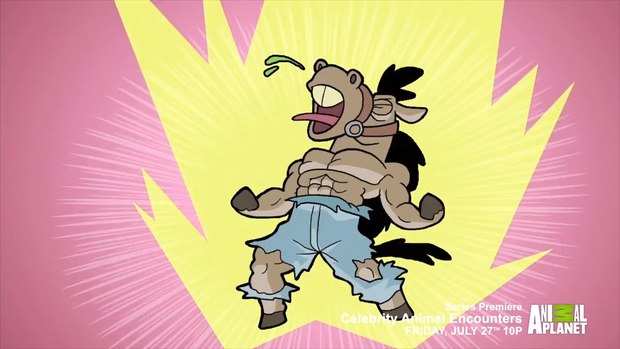 According to The Hollywood Reporter:

“From hilarious run-ins to dangerous confrontations, each episode will feature a variety of actors, musicians, athletes and influencers… While each star narrates their story, audiences will be treated to an animated reimagining of each encounter.

Further episodes will reportedly feature stories from musician Moby, and comedian Kate Micucci, among others.

Celebrity Animal Encounters began as a short-form digital series on Facebook Watch that drew in nearly four million views over the course of its four-episode run. It is being produced by Asylum Entertainment with the animation provided by Octopie Studios. Executive producers at Asylum are Steve Michaels, Jonathan Koch, Ryann Lauckner, James Macnab and Todd Waldman. Animal Planet’s Dawn Sinsel is senior executive producer, and Pat Dempsey is producer.

The series premieres on Animal Planet on July 27 at 10 p.m. Head over to THR to read the full story, and watch the trailer in the player below: