Running June 3-8, the 29th World Festival of Animated Film will screen more than 400 films from 45 countries, including 46 short films selected for the Grand Competition. 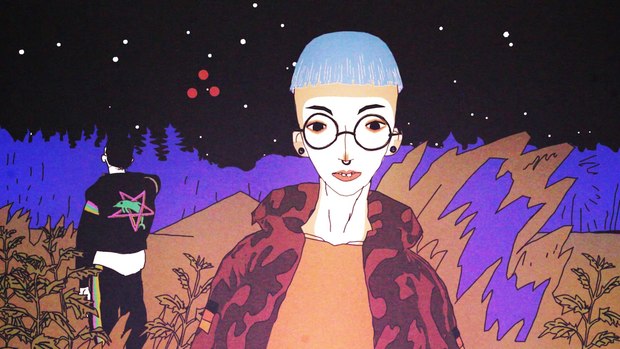 ‘Acid Rain’ by Poland’s Tomek Popakul is one of 46 short films selected for the Grand Competition at the 29th World Festival of Animated Film - Animafest Zagreb.

Zagreb, CROATIA -- Selections have been announced for the Grand Competition, Croatian Film Competition and Student Film Competition for the upcoming 29th edition of the World Festival of Animated Film - Animafest Zagreb 2019, which runs June 3-8 in the Croatian capital.

The Animafest 2019 program was presented at a press conference hosted by the French Institute by the festival’s artistic director Daniel Šuljić, festival producers Paola Orlić and Matea Milić, and a member of the Student Competition selection committee, Dino Krpan. See below for the list of selections.

This year’s festival trailer was also presented, made by the Swiss-Croatian author Michaela Müller, inspired both by Animafest’s central theme program dedicated to the connection between animation and fine arts, and by Animafest’s beloved open air screenings. The trailer is accompanied by a score composed by Hrvoje Štefotić.

This year’s program will screen more than 400 films from 45 countries all around the world, including 46 short films selected for the Grand Competition. The selection committee, which includes Dea Jagić, Tea Stražičić, Krešimir Zimonić and Dino Krpan, viewed the more than 1,800 entries from a record-breaking 86 countries for this year’s competition. France dominates the selections with 13 entries, followed by the U.K. with six and the U.S. with five titles. Selections from Taiwan, Iran, South Korea and Japan are also included, as well as from countries all across Europe.

Croatia is represented by three titles -- Imbued Life by Ivana Bošnjak and Thomas Johnson, One of Many by Petra Zlonoga and The Fall of Rome by Balász Turai (a Hungarian co-production). Two Croatian films, Saturn in Leo by Anna Šagadin and Spaced Out by Stella Hartman, will also be screened in Student Film Competition, both produced by the Academy of Fine Arts Zagreb, and 20 are included in the Croatian Film Competition.

The Grand Competition includes a large number of globally acclaimed returning directors whose careers can be traced through their participation at Animafest Zagreb, including the U.K.’s Phil Mulloy, the 2016 Animafest winner, who returns this year with his new film In the Future in his recognizable minimalist-satirical style; Regina Pessoa, the director of the most awarded Portuguese film in history, comes with an intimate (auto)biographical title Uncle Thomas, Accounting for the Days; the Emmy-nominated persistent human rights fighter Jonathan Hodgson is showing his 2019 BAFTA winner Roughhouse, another slightly autobiographical film about the reach of bullying among Liverpool students during the 1980s punk era; Tomasz Popakul, one of the freshest talents on the world animation scene in the past years, is presenting his psychedelic colors in Acid Rain; the versatile Franck Dion is showing the funny political allegory, a bird steampunk Per Aspera Ad Astra. The Student Competition received 800 entries, and included an amazing range of ideas and approaches, but with visible cultural impact of the environments they stem from, as well as individual animation schools. The Student Film Competition expresses visible influences of the gaming industry and iconography, as well as obsession with technology, sci-fi and engagement in the field of women, LBGT community and migrant rights. “Asian animation and style deriving from Japanese anime is highly present. This impact is visible also in French cinema, the most represented in the Student Competition, with 10 titles. The reason is definitely a large number of animation schools in the country,” said Krpan.

Also announced was the winner of this year’s Best Animation School Award, the Animation Department of L’Ecole de l’Image Gobelins, established in 1975. “This school, famous all over the world, has had Oscar-nominated films (Oktapodi). It has displayed exceptional level of style and narrative structure. Among 14 applications, only two were selected for the Competition, unfortunately because of its format, but all the films are undoubtedly of high quality,” said Krpan. The Animation Schools section of Animafest will screen a retrospective of the finest works from the history of Gobelins, along with section some of the best titles from the famous British National Film and Television School (NFTS).

The central theme of Animafest 2019 is a connection between animation and fine arts. “Animation is a unique artistic form striving towards visual storytelling, to dramaturgy based on visual language. It is inspired by different styles of classical fine artists and it is therefore natural that the biggest number of animation departments are part of fine arts and not film academies, just like in Zagreb,” Šuljić said.

The program for this year’s theme will include five screenings of five blocs of short films and two animated feature films. Two blocs of short films focus on titles directly inspired by individual artists, styles or classical art in general -- Italian renaissance artists, constructivists, Hieronymus Bosch and others, including Zdenko Gašparović’s Satiemania, inspired by Otto Dix and George Grosz. The third bloc focuses on artists equally present in both world, presented both in galleries and in animation, including Croatian filmmaker Marko Tadić and South African William Kentridge. The fourth bloc features a selection of abstract films, many of which were considered to be moving paintings and a natural continuation of painterly experiments by the filmmakers. These range from classics, like the German 1920s avant-garde artists Hans Richter, Walter Ruttman and Oskar Fischinger, to the pioneers of many animation techniques, such as Norman McLaren, Len Lye and Mary Ellen Bute, to contemporary authors. The final bloc presents a selection of films from this year’s entries which fit with the theme. The theme program wraps up with two features -- Miss Hokusai, an anime about the daughter of the great master of ukiyo-e, screened in Zagreb for the first time, and The Painting by Jean-François Laguionie, a lavish dedication to artists like Chagall, Modigliani, Picasso, and Matisse.

Six exhibitions are also set to take place during the festival alongside this year’s Animafest including the American artist Suzan Pitt, winner of the Animafest 2019 Lifetime Achievement Award. Pitt will receive the award in person at the festival opening on June 3, and will also host a fashion event at Kranjčar Gallery, collaborating with Animafest for the first time -- an exhibition and sale of 10 one-of-a-kind, hand-painted coats made famous by Patricia Field, the iconic stylist known for her work on Sex and the City. The retrospective of Suzan Pitt’s finest films is curated by Mark Toscano from the archives of the Academy of Motion Picture Arts & Sciences. The works of Viennese animation students will partly be exhibited at the Gallery, and partly in the expanded reality version in the Grič Tunnel. The exhibition of last year’s Grand Prix winner, Boris Labbé, at ULUPUH is also underway.

In addition to Pitt, this year’s Masters of Animation program will focus on the cinema of Portugal, with programs curated by the Portuguese Short Film Agency, a globally renowned agency for short film distribution, in association with the Portuguese Embassy. “Inspiration for the focus on Portugal came from last year’s Audience Award winner Between the Shadows, as well as the fact that this country in many aspects reminds of the Croatian animation scene,” said festival producer Matea.

Additional program information for the 29th World Festival of Animated Film, including how to purchase festival passes, can be found on the festival website. The full list of selections is shown below: