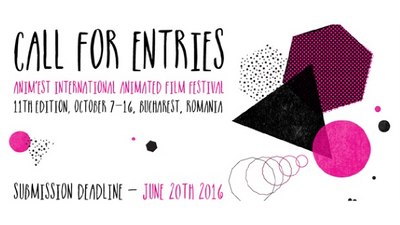 Organizers for Romania’s Anim’est International Animation Film Festival are now accepting submissions for the 11th edition of the festival, which will be held in Bucharest in October.

Launched in 2006, Anim’est has become Bucharest’s most beloved film festival and a recognized event on the international animation scene. The presentations, workshops, masterclasses and round tables provide the perfect opportunity to get in touch with the latest creations and make contacts. Previous attendees of the festival have included Bill Plympton, Georges Schwitzgebel, Juan Pablo Zaramella, John Dilworth and Mike Reiss, among many others.

The festival's program consists of six competitive sections: international feature film, international short film, Romanian film, student film, video, and the Minimest, or children’s film, category. In addition, the Mozaic section presents the hottest animation short and feature animations in international film festivals along with special sections & retrospectives dedicated to important animation studios, directors, film schools and festivals. The Anim'est Trophy is presented every year to one of the films competing in the short film competition.

The winners get trophies, prize money and/or animation software, while the best film of the festival is shortlisted for the annual CARTOON Media Cartoon d’Or Award.

Submissions can be made online and are free of charge. The deadline for submissions is June 20th. Visit the Anim’est website for rules and eligibility.