The Oscar-winning ‘Finding Nemo’ and ‘WALL-E’ director set to helm upcoming drama, written by Colby Day, that will span the history of Earth and focus on three intersecting storylines to explore life, love, hope, and connection. 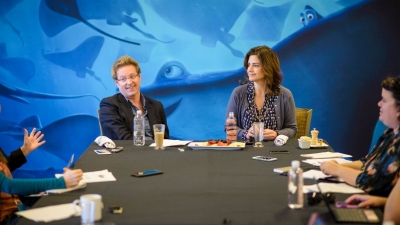 Back to the world of live-action!  Prolific Pixar filmmaker and creative leader Andrew Stanton (WALL-E, Finding Nemo, Lightyear, Toy Story 4) will pop the Disney bubble and venture into the live-action space once again with a directorial spot on the upcoming sci-fi drama In the Blink of an Eye for Searchlight Pictures, according to The Hollywood Reporter. The original screenplay by Colby Day (Spaceman) had preciously landed a spot on the 2017 Black List.

Blink will span the history of the Earth and focus on three intersecting storylines to explore life, love, hope, and connection. Stanton seems the perfect fit for subject matter so expansive, as his work is known for its epic scope.

Stanton previously won Oscars for both WALL-E and Finding Nemo in the animated feature category and was nominated for his writing. He first ventured into live-action filmmaking with John Carter (2012); recent small screen work includes Stranger Things, Better Call Saul, and For All Mankind.

No word yet on who will handle the VFX, which will almost certainly be of epic proportions.