The all-new comedy mystery series airs every day this week at 5:30 p.m. (ET/PT) and will feature guest stars Alfred Molina and Annie Potts this season. 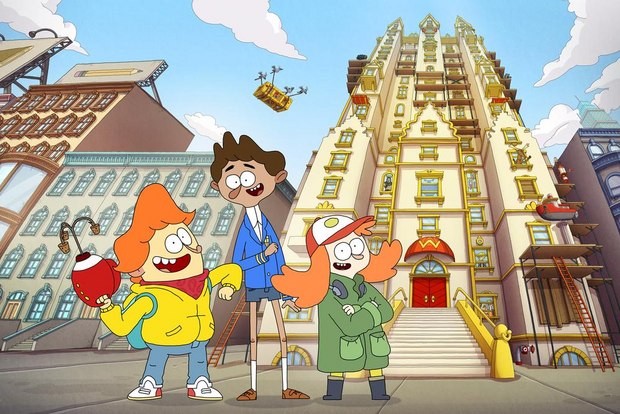 Andrew Rannells (Girls) has joined the voice cast of Nickelodeon’s newest animated series Welcome to the Wayne, which follows three kids as they explore their strange and fantastical apartment building, the Wayne, where nothing is what it seems. Rannells lends his voice as Andrei, a mysterious new neighbor with no memory of who he is or where he came from. Episodes will air every day this week at 5:30 p.m. (ET/PT). Encore episodes roll out Saturdays at 10:30 a.m. (ET/PT), before the series returns with all-new episodes in September.

Welcome to the Wayne follows the comedic adventures of three friends, Ansi Molina, Olly Timbers, and Saraline Timbers, as they aim to unlock the secrets of the Wayne. Each new investigation brings them face-to-face with new characters, creatures, and oddities, known as “Wayne Phenomena,” leading them closer to uncovering the truth about the weird things happening in their building.

The 20-episode series is created and written by Emmy Award-winning writer and composer Billy Lopez (The Wonder Pets) and executive produced by Emmy Award-winning creative executive Michael Pecoriello (Yu-Gi-Oh!). Before the full-length series, Welcome to the Wayne was Nickelodeon’s first digital short-form series, which debuted on Nick.com in 2014.

Visit Nick.com and the Nick App to learn more about Welcome to the Wayne. Fans can immerse themselves in the Wayne by following the official Instagram account to discover more about the show, characters, and mysteries within. A sneak peek, full-length episode will also be available beginning June 19 on Nick.com and the Nick App, along with platforms including iTunes, Amazon, Xbox, Google Play, Vudu, Playstation, and Nick On Demand.