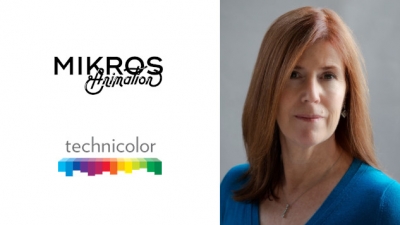 Miloro brings with her 20 plus years of experience in the animation industry. In addition to her role at Fox Animation, she previously held various senior production roles at Fox / Blue Sky Studios and Sony Pictures Animation.

“I am delighted to be joining Mikros Animation at such an exciting time,” Miloro stated. “The whole industry is going through a massive transformation which is creating new business and creative opportunities for animation. With an unparalleled track record in animation production, the high level of passion the talent has for the craft of CG animation, and the group’s global network of studios in Paris, Montreal, Los Angeles, and Bangalore, Mikros Animation is uniquely positioned to help clients bring their vision to screens, in every format, through both front and back-end creative solutions.”

In less than 10 years, Mikros Animation has delivered nine released feature animation projects including the 2021 VES-nominated The SpongeBob Movie: Sponge on the Run for Paramount Animation, Asterix – The Secret of the Magic Potion and The Mansion of the Gods for M6 Studio, Captain Underpants for DreamWorks Animation and The Little Prince for LPPTV, M6 Films and Orange Studio.

On the episodic side, Technicolor’s teams have delivered nearly 30 shows for clients (including Mickey and the Roadster Racers and Mira, Royal Detective for Disney Junior, Boss Baby: Back in Business and Fast and Furious: Spy Racers for DreamWorks Animation, and the very recent Kamp Koral: SpongeBob’s Under Years for Nickelodeon. All told, the studio has produced or co-produced more than 250 hours of episodic content for notable broadcast channels, including Alvin & the Chipmunks (co-produced by Bagdasarian Productions), the award-winning Sonic Boom (co-produced by SEGA) and the in-house creation Team DroniX (co-produced with France Television and Gloob in Brazil).

“Upcoming projects such as Paw Patrol: The Movie for SpinMaster, The Tiger’s Apprentice for Paramount Animation, and others currently in production, are exciting prospects for Mikros Animation,’ Miloro concludes. “I am thrilled to begin the next chapter for the group, with the support of a great team that has been critical to our past successes, along with a roster of new talent that will be joining the team throughout our multi-cultural studios worldwide.”