TBS treats fans with tributes, trivia, and ‘The Many Faces of Roger Marathon’ to celebrate series becoming the 25th scripted primetime show, in the history of television, to reach 300 episodes. American Dad! celebrates 300 episodes with an awesome tribute and the ultimate online trivia experience, American Dad: Head to Head. The TBS series joins the pantheon of TV greats as the 25th scripted primetime show in the history of television to reach 300 episodes.

The American Dad! online tribute is a journey through the then and now of the animated series, featuring cool images with a breakdown of fan favorite episodes, special guest star appearances, and of course America’s favorite Dad! Check it out here!

Fans can also participate in the ultimate online trivia experience, proving they are top American Dad! fans. Winners will receive shareable character collector cards based on their score. 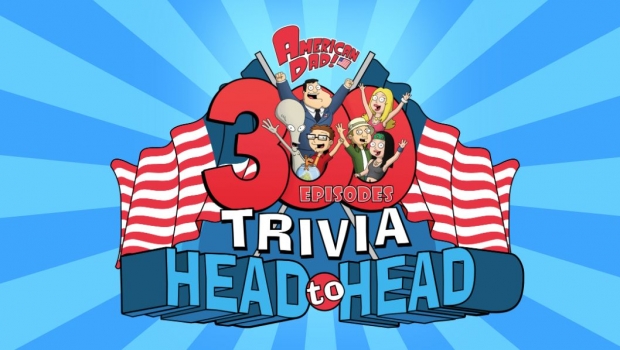 The 300th episode of American Dad! will air Monday, September 14, at 10:00pm ET/PT on TBS. Leading up to the milestone episode, fans voted on their favorite Roger personas for “The Many Faces of Roger Marathon.” Watch the five most-voted episodes starting at 7:30pm ET/PT before the 300th episode airs.

Stan tries to get an unsuspecting Jeff Fischer out of his life for good by taking him on a road trip to Florida, where there is a warrant out for Jeff's arrest.

After Snot professes his love for Hayley and gets shot down, Steve and Roger devise a plan to cheer him up. Roger dresses up as Steve's cousin from New Jersey, Jenny Fromdabloc, and Snot falls hard for her.

Stan reveals to Francine that, in the case she should die, he has a backup wife. Enraged with Stan, Francine takes Jim, one of Stan's CIA buddies, as her backup husband.

Upset that Francine has let herself go; Stan takes drastic measures when she asks him to renew their wedding vows.

Roger makes amends for the trouble he caused after he adopted a sociopathic persona; Stan and Fran get an unexpected visit from a Nigerian man whom they aided through a relief organization.

American Dad becomes the 25th scripted primetime show, in the history of television, to reach 300 episodes; and Roger's past comes back to haunt him!