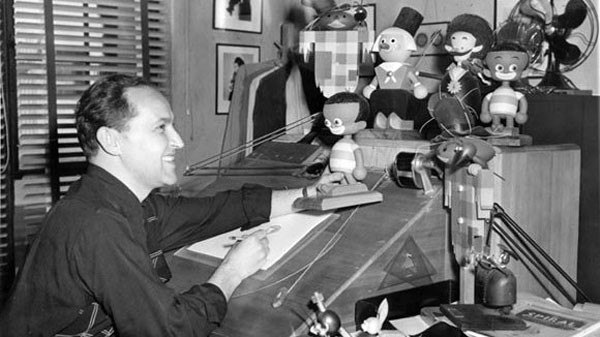 The American Cinematheque is hosting a tribute to Hungarian-born stop-motion animator and special effects pioneer George Pal. Entitled “The Worlds of George Pal,” the screening series runs Thursday, September 10 through Sunday, September 13, 2015 at the Egyptian Theatre in Hollywood, and includes special screenings of Destination Moon and When Worlds Collide, The War Of The Worlds and The Time Machine, with special appearances by actresses Barbara Rush, Ann Robinson and Barbara Eden.

Also planned is a screening of the The Puppetoon Movie with an appearance by director-producer Arnold Leibovit and animation historian Jerry Beck. Other events in the series include The Wonderful World of the Brothers Grimm and Tom Thumb on September 14, and a screening of 7 Faces of Dr. Lao on September 12, paired with “The Fantasy Film Worlds of George Pal,” a selection of archival interviews with Pal, clips from his half-century career, and testimonials from such colleagues and admirers as Ray Harryhausen, Gene Roddenberry and Tony Curtis.

Born György Pál Marczincsak in Hungary in 1908, George Pal was one of the most respected names in science fiction and fantasy. If all had gone according to plan, he would have become an architect, but after graduation he put his drafting skills to use at Hunnia Films in Budapest, where he got his start in cartooning. Moving across Europe and eventually to the United States, Pal became a pioneer of stop-motion animation with his Puppetoons.

The Puppetoons got the filmmaker a deal with Paramount, an honorary Oscar in 1944, and Short Subject Oscar nominations every year from 1942 to 1948. The novel techniques Pal and his team developed lent themselves well to films dependent on visual effects, and his productions of Destination Moon and When Worlds Collide both won Special Effects Oscars. For a generation of postwar American kids, such images as the destruction of Los Angeles’ City Hall by Martian spaceships in The War of the Worlds were burned indelibly into memory.

With 1958’s Tom Thumb, Pal took a seat in the director’s chair to indulge a fondness for fantasy that would later lead to The Wonderful World of the Brothers Grimm and 7 Faces 0f Dr. Lao. The fairy-tale magic of these films illuminates one of Pal’s most famous works, The Time Machine, whose framing device -- H.G. Wells recounting his adventures to skeptical friends -- gives the story the feel of a fable. Whether through time or space, George Pal took moviegoers on journeys to worlds of boundless imagination.