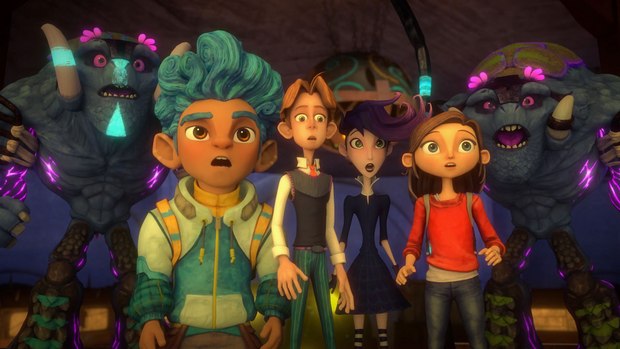 SEATTLE -- Amazon has announced that Lost in Oz, the highly-anticipated animated kids series for children ages 6–11, will premiere August 4th on Prime Video in the U.S. and U.K.. The new series expands on the multiple Emmy Award-winning Amazon Original special, Lost in Oz: Extended Adventure, is a magical, modern adaptation of the beloved Oz books from L. Frank Baum for today’s families.

The premiere will be broken into 3 separate episodes, and 10 new episodes will be added. Lost in Oz features the voice talents of Ashley Boettcher (Gortimer Gibbon’s Life on Normal Street), Gina Gershon (Red Oaks), Allison Mack (Smallville), Jorge Diaz (Elena of Avalor), Nika Futterman (Star Wars: Clone Wars), Stephen Stanton (Star Wars Rebels) and Keith Ferguson (The Lego Movie), and will be available to stream exclusively for Prime members via the Amazon Prime Video app for TVs and devices. Prime members can also download the series to mobile devices for offline viewing at no additional cost to their membership.

In Lost in Oz, 12-year-old Dorothy Gale discovers her mother’s magical travel journal hidden beneath the floorboards of their Kansas home. The book triggers a tornado, which rips her house from its foundation and transports Dorothy and her dog, Toto, to Emerald City, a bustling metropolis. In order to get home, Dorothy learns she must acquire every element on Oz’s “periodic table of magic” -- while the city faces the worst magic drought in eons. Along the way, Dorothy and Toto meet unlikely allies in West, Ojo, Reigh the Lion, Scarecrow, and Glinda the Good, who are each eager to help, but struggling with their own problems. Together, they navigate the magical landscape of Oz while undergoing their own unique journeys of self-discovery.

“We’re excited for families everywhere to experience the magic of this serialized action-adventure comedy, led by a fearless female character and featuring a diverse group of friends,” said Tara Sorensen, Head of Kids Programming at Amazon Studios. “The Lost in Oz pilot and the extended special were extremely popular with young viewers and parents alike, and the new series, poised to be the next Oz-based classic, serves up even more fun for fans.”

The Lost in Oz: Extended Adventure special is currently available to stream and enjoy using the Amazon Video app and online at www.amazon.com/originals. For a list of all Amazon Video compatible devices, visit www.amazon.com/howtostream. Lost in Oz is also available as part of Amazon FreeTime Unlimited, the all-you-can-eat subscription service designed from the ground up for kids, available exclusively on Amazon devices.