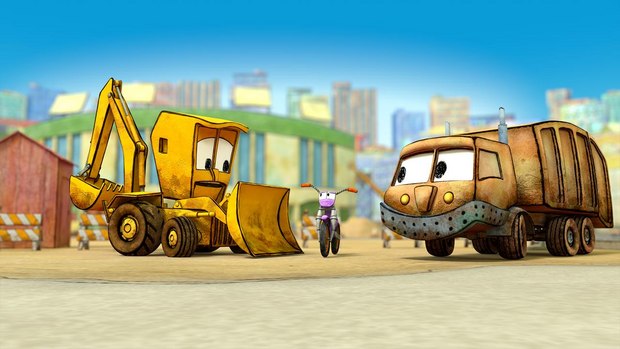 SEATTLE, WA -- Amazon has announced its brand-new Amazon Original Kids Series, The Stinky & Dirty Show, is scheduled to premiere on Friday, September 2 on Prime Video in the US and UK, and in Germany, Austria and Japan later this year. Based on the I Stink! book series by Kate and Jim McMullan, The Stinky & Dirty Show follows the adventures and mishaps faced by best friends and unlikely heroes, Stinky the garbage truck and Dirty, the backhoe loader.

The pilot episode is now available to stream and download, with nine additional episodes to debut on September 2 exclusively for Prime members via the Amazon Video app for TVs, connected devices including Fire TV, mobile devices and online—Prime members can also download the series to mobile devices for offline viewing.

In The Stinky & Dirty Show, whether it’s rescuing their pal Mighty the tugboat, or moving a giant boulder blocking the highway in their town of Go City, Stinky and Dirty are a dynamic duo of resourcefulness who learn when things don’t go as expected, asking “what if” can lead to success. They don’t always do things the way you’d expect, like reusing trash as makeshift tools and materials, and for them, hilariously failing turns out to be one of the most fun paths to success.

“The popular books have laid the groundwork for a beautifully inspiring television series for preschoolers that instills one of the most important life skills, resourcefulness,” commented Tara Sorensen, Head of Kids Programming at Amazon Studios. “We are thrilled to bring to our customers, who embraced the pilot, a full season of The Stinky & Dirty Show and are proud be collaborating with Kate, Jim, Guy and Jessica as well as Dan Bern and a very recognizable celebrity voice cast on this upbeat and empowering show.”

The Stinky & Dirty Show also features voice talent from Jaden Betts (Doc McStuffins) as Stinky and Jacob Guenther (Crazy Ex-Girlfriend) as Dirty. The series is directed by David McCamley (Peter Rabbit) and produced by Gillian Higgins (Doc McStuffins). The 20-song soundtrack for the series, composed and performed by Bern, will also be released on September 2, exclusively streaming on Prime Music.

The Stinky & Dirty Show was part of Amazon’s kids pilot season last year, a unique development process that gives all customers an opportunity to stream and review pilots in order to help choose the next Amazon Original Series that are then available to Prime members.