Amazon Studios launching six new animated pilots, including an adaptation of the ‘If You Give a Mouse a Cookie’ book series, Moonbot’s ‘The Numberlys,’ and ‘Eddie of the Realms Eternal,’ from writing duo Bill Motz and Bob Roth. 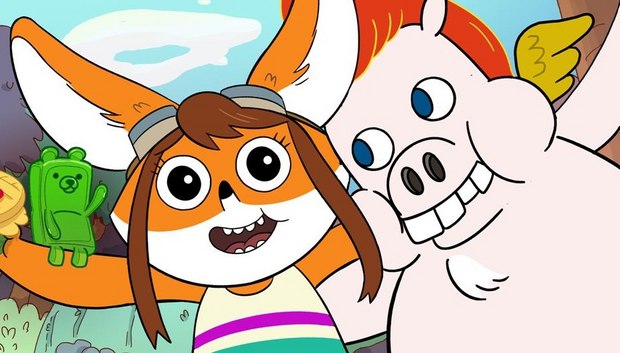 SEATTLE -- Amazon has announced the lineup for its fall kids pilot season which is set to debut later this year exclusively on Amazon Video in the U.S., U.K., Germany, Austria and Japan. Amazon customers will find a slate of animated pilots, including a preschool-aged show based on the beloved book series If You Give a Mouse a Cookie and The Numberlys, a story for preschoolers that follows best friends who encourage children to think beyond the way things are always done. Animated pilots for children ages 6 to 11 include Danger & Eggs, a show that chronicles the endless adventures of fearless D.D. Danger and her ever-cautious best friend, a giant talking egg; Eddie of the Realms Eternal, a story that centers around a meek teen who balances a hero’s life while dealing with the ordinary pressures of middle school life; Everstar, a journey that follows an adventurous 12-year-old girl who accidentally intercepts an intergalactic SOS signal and is brought aboard a rogue spaceship that travels the universe; and Yoyotoki HappyEars!, a story that follows a fox whose family accidentally lands on Mytholopia and encounters its unusual citizens who stir up their lives in extraordinary ways. These pilots—along with primetime pilots Edge, Good Girls Revolt, Highston, One Mississippi, Patriot and Z—will debut November 5 on Amazon Video.

Amazon customers will once again be invited to watch and provide feedback on the shows they want to see turned into full series for Prime members. All pilots will be available via the Amazon Video app for TVs, connected devices and mobile devices, or online at Amazon.com/amazonvideo.

“Our new kids pilots will combine rich worlds with unique characters that we hope will appeal to our customers,” said Tara Sorensen, Head of Kids Programming for Amazon Studios. “We’re delighted to debut these animated projects from such esteemed and remarkable creative talent.” If You Give a Mouse a Cookie (for preschool-aged children)

When you give a mouse a cookie, he’ll probably ask for a glass of milk, and then….who knows what he’ll ask for next? If You Give a Mouse a Cookie follows the adventures of Mouse, Oliver and other familiar friends as they discover that when you’ve got a curious Mouse for a friend (not to mention a Moose, a Pig, a Cat and a Dog), one thing always leads to another, then another, and then another! You never know what to expect, but you do know it’s going to be fun—and maybe a little bit messy. Much like the books, the story will start in one place and lead to unexpectedly delightful twists and turns until we are back at home where we started. If You Give a Mouse a Cookie is based on the beloved books by Laura Numeroff (Dennis the Menace) and Felicia Bond and written and developed by Emmy Award-winning writer Ken Scarborough (Arthur, Doug).

The Numberlys (for preschool-aged children)

Based on the award-winning book, short film, and app, The Numberlys are five best friends who discover something they've never seen before—a tiny sprout in their concrete and metal city. Though they don't know what it is, they decide to protect this unique little thing against all obstacles. Through invention, stumbles and bumbles, they help the sprout become a beautiful tree, making a lasting, joyful change in their world. Created by William Joyce and Brandon Oldenburg of Oscar Award-winning Moonbot Studios (The Fantastic Flying Books of Mr. Morris Lessmore, Silent, Scarecrow), executive produced by Lampton Enochs (Super), written by Emmy Award winner Joe Fallon (Between the Lions, Arthur), and directed by Saul Blinkoff (Doc McStuffins, Kronk’s New Groove), The Numberlys encourages children to think beyond the way things are always done and to imagine the way things could be in their world. Eddie of the Realms Eternal (for children ages 6-11; animated)

When lazy, unfocused wizard elf Hobi is faced with the return of the evil Shadow Queen to the Realms Eternal, he summons the greatest hero in all of the planes of reality, “Edward Armstrong.” Unexpectedly, Hobi gets a meek teen named Eddie who, much like him, has absolutely no idea what he’s doing. Together, Eddie and Hobi must work together to banish the Shadow Queen from the Realms for eternity while Eddie balances a hero’s life with the ordinary pressures of middle school life. Eddie of the Realms Eternal is created by Emmy Award-winning writers Bill Motz and Bob Roth (The Penguins of Madagascar) and animated by Oscar-nominated studio Cartoon Saloon (The Secret of Kells, Song of the Sea). When adventurous 12-year-old Ainslie Wickett accidentally intercepts an intergalactic SOS signal from a lighthouse in Maine, she and her best friend George are brought aboard a rogue spaceship called the Everstar. After defending the ship from pirates, they embark on a journey across the universe where she and her crew encounter aliens, uncover the mysteries of the Everstar and search for a way back home. Everstar is created by Becky Tinker and executive produced by John Rogers (The Player, The Librarians) and Jennifer Court. When Yoyotoki HappyEars and her fox family accidentally land on Mytholopia, they find themselves in a land where mythical creatures rule and magic is the norm. Although they try to keep their lives as normal as possible (and their jellybean pot pie business up and running), the unusual citizens of Mytholopia stir up their lives in extraordinary ways. Together with her buddies Steak and Hotwings, Yoyotoki discovers the magic in just being herself -- and learns the hard way that you should never trust a Medusa snake to give you directions. Yoyotoki HappyEars! is created by Niki Yang (Adventure Time, Bravest Warriors).