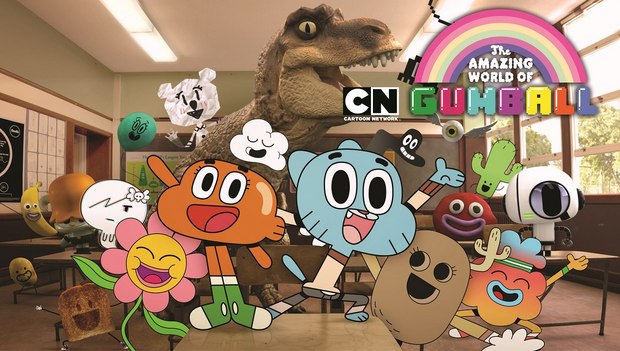 LONDON & LAS VEGAS -- Cartoon Network announced that it has greenlit a sixth season of the global hit animated series, The Amazing World of Gumball, further building on the studio’s hugely successful comedy slate and the show’s outstanding performance to date. Produced in the UK and Germany, the mixed media family sitcom has become a global favorite since it first launched in 2010.

The multiple award-winning series has scooped 28 international awards to date including six BAFTAs and an Emmy. Production began this month at Cartoon Network’s EMEA studio, Great Marlborough Productions, in Shoreditch, London. Season five is slated to begin airing from September 2016 internationally and is set to premiere next year in North America.

Now in its fourth season, The Amazing World of Gumball cleverly combines live action with 2D and 3D animation to chart the adventures of the energetic and fearless blue cat, Gumball, and his idiosyncratic family, the Wattersons. The series is created by Ben Bocquelet, executive produced by Sarah Fell and series-directed by Mic Graves.

The show reached more than 165 million viewers globally in Q1 2016 with an increasingly strong presence across digital platforms, with the latest global mobile game launch Agent Gumball reaching #1 overall in the iTunes charts on iPad in five countries and #1 in the Kids category in 27 countries. Last year’s EMEA-developed app Rainbow Ruckus also ranked number one in the iTunes paid apps chart in 27 countries across the globe and a top #5 paid app in 65 countries in its launch week. To date, Gumball has produced almost 7 million app downloads worldwide, attracted more than 9 million Facebook fans and has generated 8 million views on its YouTube channel this year alone.

Patricia Hidalgo, Senior Vice President, Chief Content & Creative Officer, EMEA Kids & International Kids Strategy at Turner commented, “The Amazing World of Gumball is a great example of how a European production can establish itself as a top performing kids’ animation around the globe and a pillar to Cartoon Network’s ratings and DNA globally. We continue to be thrilled by its performance, not just on our linear channels but on multiple Cartoon Network platforms right across the world and there was really no question that we’d be taking Gumball’s amazingly imaginative world into a sixth season.”

Ben Bocquelet, Series Creator, The Amazing World of Gumball, added, “Gumball, Darwin and the Watterson family have so much more to give and I'm excited to be working with our fantastic team at Cartoon Network Studios here in London to create a sixth season of The Amazing World of Gumball. We have big plans for the show and are already working on new episodes that we hope will have audiences laughing louder than ever. Thank you to Cartoon Network for truly supporting the show and our creative vision, and apologies once again to my family who are about to be the butt of another series of jokes.”

The Amazing World of Gumball follows the Wattersons, a totally normal family. Dad is your regular 6’4” pink rabbit who stays at home while Mom works in a rainbow factory. Their kids are pretty standard too. There’s Gumball, a blue cat with a giant head; Anais, a four-year-old genius bunny; and Darwin, a pet goldfish who became part of the family when he sprouted legs. At the heart of the show is Gumball who faces the trials and tribulations of any twelve-year-old kid, like being chased by a rampaging T-Rex, sleeping rough when a robot steals his identity, or dressing as a cheerleader and doing the splits to impress the girl of his dreams.

The Amazing World of Gumball is an animated family sitcom for kids that offers a warm hearted, funny and surreal kid perspective into everyday life, in a way that they and their families can relate to. Season four is currently airing on Turner channels across the globe and season five is set to roll-out from September 2016.