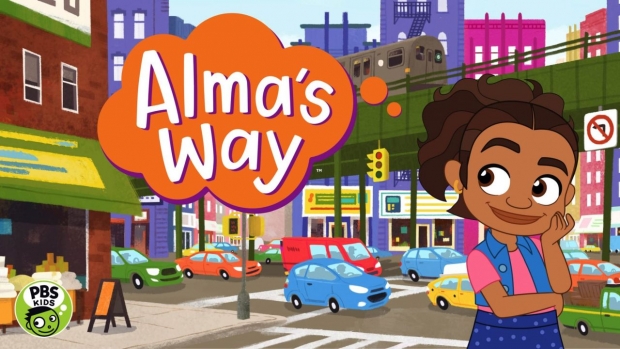 The new animated series Alma’s Way is created by Sonia Manzano. Known by generations of Sesame Street viewers as “Maria,” Manzano broke new ground as one of the first Latino characters on national TV. Inspired by her own childhood, Alma’s Way centers on 6-year-old Alma Rivera, a proud, confident Puerto Rican girl who lives in the Bronx with her family among a diverse group of close-knit friends and community members. Infused with humor and grounded in a social and emotional curriculum, the series will give children ages 4-6 the tools to find their own answers, express what they think and feel, and recognize and respect the unique perspective of others.

“I am so excited to be working with PBS KIDS and Fred Rogers Productions to introduce Alma, a strong and positive Puerto Rican girl who will empower young viewers,” shared Manzano. “Alma’s way is to think things through, and we hope the new series will show kids that their thought processes are valid and give them the confidence to think critically.”

The series is produced, written, and directed by a diverse team, and Latino voices are imbued throughout the series, both on screen and behind the scenes. The series is created by Lifetime Achievement Emmy-winner Manzano and produced by Fred Rogers Productions. Ellen Doherty and Manzano are executive producers. Jorge Aguirre (Goldie & Bear) is head writer. The series is animated by Pipeline Studios (Elinor Wonders Why).

Launching in tandem with the show, digital content for kids, parents and teachers will further the messages and goals of the show. Series-inspired games will be available in English and Spanish on pbskids.org and on the free PBS KIDS Games App. Spanish and English language parent resources, including tips and hands-on activities to extend the learning at home, will be available on the PBS KIDS for Parents site, and PBS LearningMedia will offer tools for teachers, including video excerpts, games, teaching tips, and printable activities.