Visual studio handles all aspects of new campaign from Team Detroit from concepting the approach to live-action production and VFX and post. 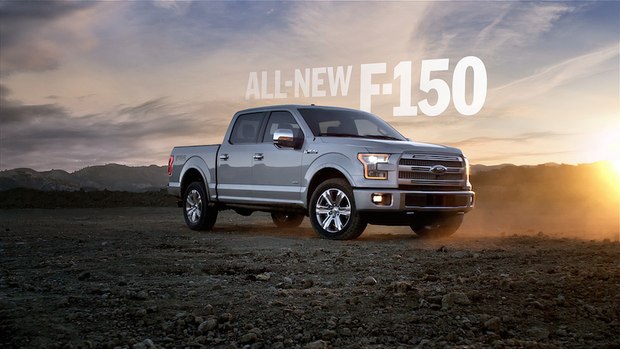 Los Angeles, CA -- In its first collaboration with ad agency Team Detroit, Alma Mater Director and Co-Founder Brian Mah showcased the 2015 Ford F-150’s many new features with a stunning launch package that premiered on New Year’s Day during ESPN’s College Football Playoff coverage. The campaign is highlighted by the anthem spot “Forward March” (:60) and three :30s, “Move It” and “What’s Next” and "Leadership." Two more :30 spots are to follow, including “Keep Going,” and “Marchando,” a Hispanic-market version.

Alma Mater worked closely with Team Detroit to conceptualize an approach that would diverge from the graphic-focused nature of previous campaigns by bringing the truck into its real-world, utility-focused environments. In doing so, they chose to ground the campaign in gritty live-action versus any CG executions. Staying on brand, they carried over their instantly recognizable VO from the previous campaign.

Each spot showcases the truck’s unprecedented military-grade aluminum alloy body, game-changing fuel efficiency and hauling and towing capabilities, among a list of new innovative features. Alma Mater visualized this by using a motion controlled, match-cut technique that depicts the F-150 seamlessly driving through various live-action environments, from farms to construction sites and across a wide variety of terrain.

“The great thing about using match-cuts for the campaign is that it allowed us to use the truck and the people who use it to connect completely varied locations, and industries,” explains Mah. “With this approach, we can fluidly follow the path of the F-150 through a wide breadth of weather and geographical contexts. We felt like this was the best way to highlight the extensive list of industries and functions within which this iconic truck thrives.”

“Brian [Mah] and his team were incredibly collaborative throughout the entire process,” says Hensen. “He and Alma Mater were completely new to me, so I didn’t know what to expect. I loved that no matter how many curveballs we threw or how many U-turns we made, he never got rattled. He always had a solution and a calm, reasoned and creative solution to offer. In production, Brian and his Executive Producer, Kathy Kelehan, were amazing partners. I never worried about anything. While automotive work was not their strong suit going in, that didn’t affect the work at all -- it improved it. They brought their own particular brand of design magic & production science to bear on our project and made it look great. I can’t wait to work with them again.”

“The gravity of this assignment was immense, matched only by the creativity, skill, and craft of Alma Mater,” adds Bob Rashid, Team Detroit Executive Producer. “Every detail was attended to with purpose and collaboration. Two crews for seven days can be exhausting, but Brian’s energy never waned. An impossible finishing schedule was embraced and accomplished with all hands energetically on deck.”

To accomplish this technique, and to express the expansive scope of the F-150's settings, Alma Mater knew that they needed to cover a large quantity of shots for each spot in the campaign. From farms to a forest, shipyard, rock quarry and energy plant, Alma Mater travelled across Southern California to shoot the various landscapes. To operate as effectively as possible during the seven-day shoot, Alma Mater beefed up its crew to two full camera units working simultaneously, enabling them to cover the extensive list of truck and talent-driven shots within each locale.

Director of Photography Jordan Valenti shot on a 6K RED EPIC DRAGON during the packed production schedule. To create the match-cutting effect, Alma Mater used a combination of motion control and safari arm rigs, which they attached directly to the body of the F-150, allowing the team to register and repeat camera moves within each environment. “Each day was a race to beat the sunset,” says Mah. “We planned a very aggressive shoot schedule that needed to cover a wide amount of shots on the shortest days of the year. Jordan was amazing at achieving an incredible aesthetic for the shots in a fast and efficient manner.”

Although nearly 95% of the special effects used in the spot were shot practically, there were some elements that needed to be accentuated in post. Matte paintings, photo-real 3D elements, location extensions, and subtle atmospheric elements were added to the shots to accentuate the compositional connections between scenes even further. For these effects, Alma Mater worked in Maya, After Effects, Nuke, Flame, Fume FX, PF Track, Photoshop & Illustrator.

James Anderson, Alma Mater VFX Supervisor and Co-Founder, oversaw the post-production aspect of the project. “This campaign was a good fit for Alma Mater because it combined our graphic sensibility of live-action with our technical expertise in post,” says Anderson. “We wanted to incorporate strategic elements within the scenes that would align with the subsequent shot. A telephone pole along a desert road in one scene transitions to a tree trunk in a forest-lined mountain road; a stack of hay bales in a farm shot becomes a stack of cinder blocks on a construction site. These are the kind of creative details we enjoy sinking our teeth into.”

The tight post-production schedule was equally demanding. Along with Hensen and Rashid, Creative Director/Art Director Beth Hambly and Creative Director/ Writer Dan Weber worked directly with Alma Mater in the studio to finalize the project.

“Team Detroit was instrumental in enabling us meet the demands of this schedule,” concludes Kathy Kelehan, Alma Mater Executive Producer and Co-Founder. “Their extensive knowledge and expertise with the F-150 and the Ford brand made the process incredibly efficient. We’re absolutely thrilled to have been able see this concept through to completion, and are grateful to Team Detroit for their confidence in entrusting us to take their already successful campaign in this new direction.”