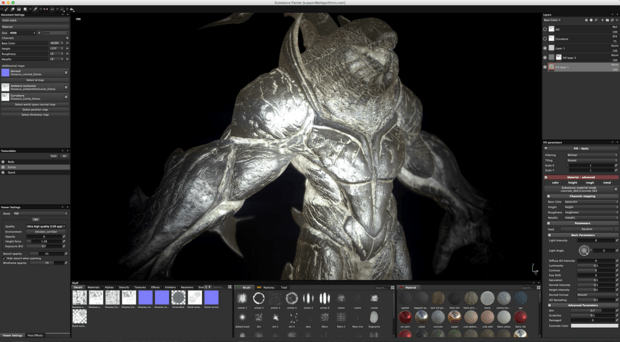 Marina Del Rey, CA -- The talk of the gaming world is now production-ready thanks to a few new power packs. With the highly anticipated release of Substance Painter 1.0, Allegorithmic is bringing a new UI, 4K support, and the ability to load custom shaders to its award-winning, next-gen painting application.

"Substance Painter is a look into the future of asset creation,” said Carlos Montero, Environment Art Lead at Cryptic Studios. “Its speed and feature set put other methods to shame - a really exciting step forward."

On top of its core ability to accurately replicate the look of age, decay and fractures, Substance Painter 1.0 ushers in a new generation of 2D/3D painting apps that are dedicated to game developers’ needs. Attributes like multi-channel painting, non-destructive workflows and physically based rendering read like a checklist for the modern artist. The addition of high-res support and a customized version of Popcorn FX’s particle editor will only help bolster Substance Painter’s image as an instant classic.

“Substance Painter carries the potential to fill a much needed gap in next-generation texture painting,” said Rich Diamant, Principal Artist at Riot Games. “Using physically based shaders helps artists see an extremely close representation of what an asset will look like in game; but it’s the ability to use custom substances as the tool automatically re-projects your history that makes Substance Painter the future of texturing. Plus particle painting is so cool!”

“The time has come to unleash Substance Painter 1.0,” said Dr. Sébastien Deguy, Founder and CEO of Allegorithmic. “After a humbling and exciting beta phase that confirmed how ready the industry has been for a revolutionary tool, Substance Painter has grown to include the production-level feature set game artists need to create the most realistic textures in the business. Of course, Substance Painter will keep evolving quickly and profoundly in the future, but this release is our signal that now is a good time to jump in!”