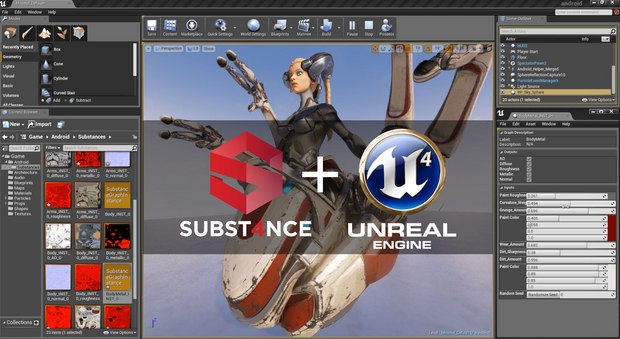 MARINA DEL REY, CA -- 3D technology developer Allegorithmic’s Substance Engine is coming to one of the gaming world’s favorite development platforms. With a full integration into Unreal Engine 4 (UE4), Substance Engine makes the creation of next-gen textures a seamless experience for even the most ambitious of game developers. No purchase required, just a free plugin available for all Unreal Engine 4 developers.

Allegorithmic's past successful integration efforts include the full source Unreal Engine 3 and its free version, the Unreal Development Kit (UDK), as well as platforms in the mobile space, and consoles like the Xbox One and PlayStation 4.

“Unreal Engine 4 is going to help the game industry transition to a Physically Based Rendering world,” said Dr. Sébastien Deguy, Founder and CEO of Allegorithmic. “Game developer tools and pipelines have to adapt to this new paradigm which has become a requirement to upscale visual quality. Our physically based workflow in UE4 will finally give the modern game artist the realism next-gen games demand.”

With every year, game artists are under the gun to put new levels of accuracy into their environments and characters. Combining Substance Engine’s runtime customization features with UE4’s famous rendering quality allows for textures to be more realistic than ever. This unique technology helps artists rapidly iterate on textures directly inside UE4, massively reduces download sizes and even modify textures at runtime.

“We're thrilled to see Allegorithmic leading the way by making Substance Engine available to the entire UE4 community," said Tim Sweeney, Epic Games founder. "Epic's release of the complete UE4 source code creates an unprecedented opportunity for integration of great middleware products like this. The community can use these features and help shape the future direction of the engine.”

Soon, pre-made substances like filters, textures, and mini-tools will be available in the UE4 Marketplace, making it even easier for artists to incorporate high-quality dynamic content into their game. For those who can’t wait, these tools are now available on the Allegorithmic website.

“When the best in the business want to push their game’s graphics and game production pipelines, they use our texturing technology,” added Deguy. “This deep integration is just another way to make that process more convenient for indies and AAA game devs.”

Substance Engine can be found on Epic Games’ GitHub account.