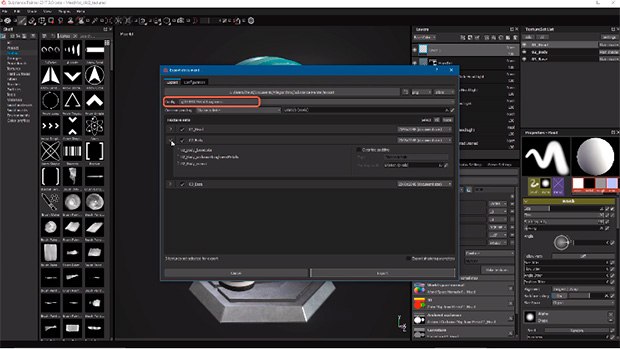 “Substance materials were already a part of Felix; now the ability to import custom models textured with Substance Painter will be as well,” said Dr. Sébastien Deguy, founder and CEO of Allegorithmic. “As 3D gets easier to create and customize, more people will gain access to its benefits. That’s the point of both products, so making them work well together is a top priority.”

Since going numberless last June, Substance Painter has gained 10 new features and improvements. This release of Substance Painter adds six more. In addition to seamless exportation to Felix, users will now have access to a new gITF exporter, further improving the transmission and loading of 3D models into third-party applications. A new auto-backup plugin will also be available as a separate download.

The update will also introduce a pair of improvements to the user interface, including updated tabs and the ability to drag-and-drop .spp files or meshes directly into the viewport. The gradient filter has also been updated to support up to 10 keys, making it easier to texture materials by adding gradients to curvature and ambient occlusion bakes. The updated gradient filter can also be used to create more advanced patterns, such as rust, from procedural noises, as well as advanced pattern variations when users change the height inputs.

Allegorithmic’s Integrations Product Manager, Wes McDermott, will host a YouTube live session on Oct. 11 highlighting the new features. The webinar will begin at 11 a.m. PT / 2 p.m. ET and can be viewed here.

A free 30-day trial of Substance Painter is available now.