CLERMONT-FERRAND, France -- Building off the announcement of a bold new game development tool for 3D artists, Allegorithmic is unveiling that the Substance Painter beta is now publicly available on the Steam platform. Substance Painter is a patented, next-gen painting application that, among other innovative features, accurately replicates the look of age, decay and fractures virtually via a new particle-based painting system. It can be found on the Steam homepage as a featured software tool starting March 6.

Moving Substance Painter to a public beta has included a string of new feature enhancements. Alpha tester feedback has yielded better UI and UX functionality, a comprehensive library of PBR brushes, stencils and particle presets and a better 3D PBR preview. Substance Painter will also be one of the first software packages to take advantage of Steam’s popular achievements system. Now users can enjoy a game-like experience that they can share with friends while trying out this new 3D painting application.

“When we show Substance Painter to artists, enthusiasm is an understatement. We see that as a great sign that we are on the right track,” said Dr. Sébastien Deguy, Founder and CEO of Allegorithmic. "But turning that into a full product requires a lot of iterations and adjustments. Since day one, we have been willing to put 3D artists at the heart of this iterative process to make sure we deliver on that promise. Making the beta public will help us build the best tools for their craft while pushing innovation as much as possible.” 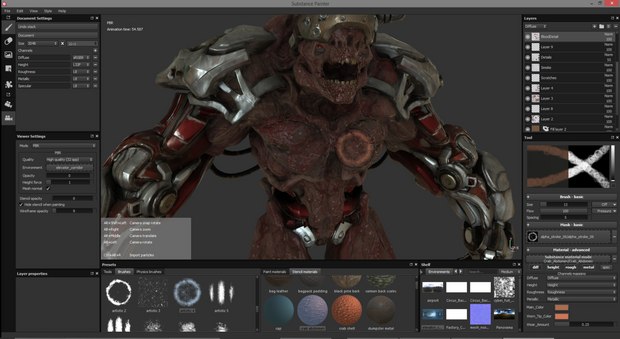 Much of this excitement comes from Substance Painter’s multi-channel particle brushes, which follow physical laws and mimic aging processes like decay, cracks, dust accumulation and stains. Artists can use these brushes to produce next-gen quality details through highly attuned controls that easily follow precise hand movements.

The decision to utilize Steam stemmed from a desire to meet artists where they work. “The number of development tools on Steam is growing every day to increasing success,” added Deguy. “Allegorithmic has always operated under the notion that you give artists what they want, where they want it. This way we can make tools that delight artists on multiple levels – whether it’s through the design, the distribution channel, or the degree to which it elevates the community.”