The platform has just setup free viewing of 15 films vying for ‘Best Animation Short’ nominations through January 24, alongside A24’s ‘Marcel the Shell With Shoes On’ and bonus material for ‘Guillermo del Toro's Pinocchio,’ ‘Wendell & Wild,’ ‘The Bad Guys,’ and ‘Turning Red.’ 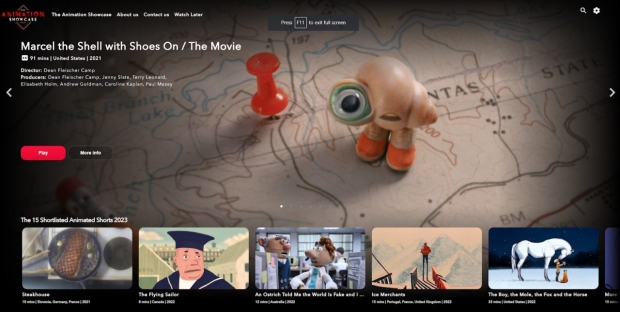 The Animation Showcase has just announced that the 15 Oscar Shortlisted films in the category Best Animation Short Film are now available worldwide for free viewing on its streaming platform until the Oscar Nominations Announcement on January 24.

“While the feature films are widely accessible from theatrical release and major streaming platforms during the Award Season, the short films are often much more difficult to access,” noted The Animation Showcase CEO Benoit Berthe Siward. “Therefore, we couldn’t be more proud to feature the complete collection of Shortlisted Animated Shorts for free, available to all the members of the animation and motion picture industry. This means that for the 3rd year in a row, our platform is the only place in the world where to watch all the shortlisted shorts, alongside The Academy Screening Room.”

A24’s first animated feature, Marcel the Shell With Shoes On, directed by Dean Fleischer Camp, will also be accessible to watch worldwide for all industry members of the platform until the Oscars Nomination Announcement on January 24, alongside bonus content and featurettes.

Bonus content, including “making of” videos, Q&As, and featurettes, is also streaming on the platform, including a 36-minute special, Guillermo del Toro's Pinocchio: Handcarved Cinema, a behind-the-scenes of Netflix’s Wendell & Wild, DreamWorks’ The Bad Guys Q&A, and the making of Pixar’s features Turning Red, and Lightyears.

The Animation Showcase Streaming Platform specializes in spotlighting and promoting the best creations from the animation community. In addition to streaming animated projects, the industry-only platform curates the best short films from filmmakers around the world and, for a limited time, gives the animation and motion picture community a chance to discover or rewatch feature films for a limited time.

Industry members and students can register here to access the films.