The popular animated preschool series take kids on adventures with the Dino crew as they explore their world, overcome fears, and learn to solve problems together; new episodes feature a whole ‘clutch’ of new friends. 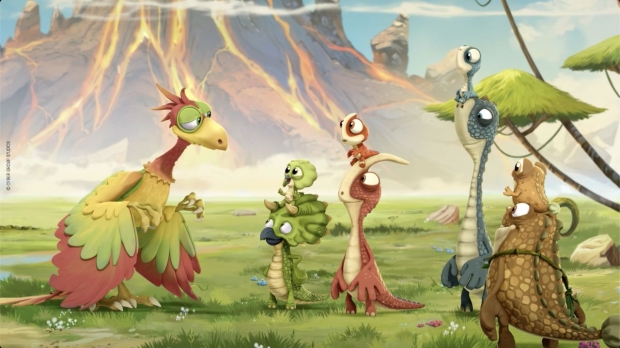 All-new episodes of the popular animated preschool series, Gigantosaurus are coming March 29 to Disney Junior. Kids can look forward to a whole new “clutch” of creatures including Plink, Plonk, and Plunk – a trio of dolphin-like ichthyosaurs - and Mazu, Tiny, and Bill - three new baby dinos that hatch onto the scene.

The four dinos meet three new friends in the lake: Plink, Plonk, and Plunk, three dolphin-like ichthyosaurs. While Rocky bonds with adventurous Plink and Tiny goes off to paint with artistic Plonk and Mazu, and nerdy Plunk discover a new invention together, Bill feels left out. He’s not brave or artsy or smart! But when Termy “befriends” him – and uses him unwittingly in her scheme for total domination – Bill discovers just how important he really is to his three besties. When Rocky has to watch his baby cousin for the day, he asks Tiny to keep an eye on little Rolo’s favorite toy, SnuggleSaurus. Rolo is obsessed with the toy and can’t nap without it. Tiny promises she won’t let the doll out of her sight! And then she promptly breaks her promise. Tiny is going to do everything she can to get SnuggleSaurus back, even if it means doing some crazy stunts involving Giganto!

It’s baby time in Cretacia! Suddenly Mazu, Tiny, and Bill find themselves with little siblings to go along with Rocky’s baby cousin. And babies are a handful! But Mazu thinks she can watch them all herself – with her brains and gadgets that make life easy, she’s sure to have no problems. But the moment her back is turned, chaos erupts, and Mazu soon learns that babies can outwit even the cleverest dinos! In every episode, Gigantosaurus invites the youngest of viewers to follow along with inquisitive Mazu, playful Tiny, timid Bill, and courageous Rocky…and all their new friends. They go on quests to explore their world, facing their fears, working together to solve problems, learning more about the Big Guy – the mysterious Gigantosaurus himself – and having lots of fun all along the way. The series also incorporates a wide array of real dinosaurs, from Leon, the friendly archelon, to Plink, Plonk, and Plunk, a bunch of playful ichthyosaurs, and realistically rendered flora and fauna that is true to the time.