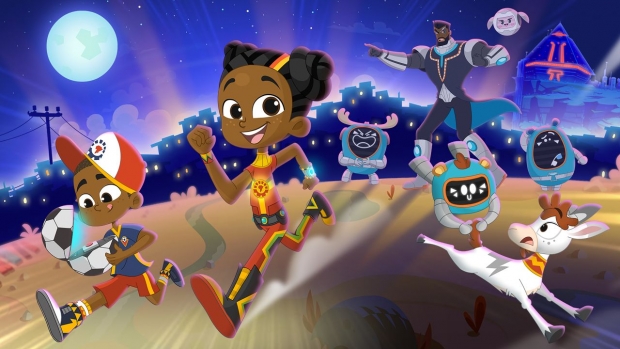 Children’s edutainment studio Kukua delivers five new episodes of its animated series featuring a young superhero African girl named Sema. The newest adventures of this free-to-stream series will be available Friday, March 26 at 8:00AM PT / 11AM ET, with additional new episodes continuing to roll out into April, on the YouTube Originals for Kids & Family channel.

The series follows the world-changing adventures of an extraordinary young African girl, Sema, fueled by STEAM (Science, Technology, Engineering, Art, and Math) superpowers, who lives in the neo-African-futuristic community of Dunia.

In the latest episodes, Sema and her twin brother MB use their “technovating” powers to save their town of Dunia from a heartless robot uber villain by "dreaming up the craziest ideas and believing in them" all from their secret lab. Some of their adventures and inventions include gigantic elephant toothpaste to win the STEAM fair; making Babu's dream to walk on the moon come true; and launching a viral cooking show to save Ms. Pum Pum famous mandazis!

The series is produced by Nairobi-based, children’s edutainment studio Kukua. Founded by Lucrezia Bisignani in 2015, the studio features an award-winning female team, working at the intersection of technology, entertainment, and education. Super Sema was written by four-time BAFTA winner Claudia Lloyd (Charlie & Lola, Mr. Bean, Tinga Tinga Tales) and directed by Lynne Southerland, the first female African American director for Disney (Mulan II) with Lupita Nyong'o (12 Years a Slave, Black Panther, Us) lending her voice as a major character in an upcoming two-part episode, as well as the official Super Sema trailer.