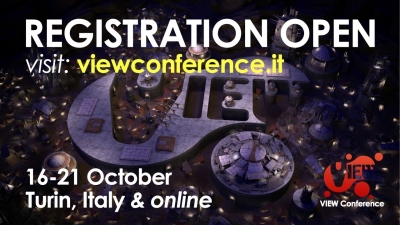 Italy’s premiere animation event is around the corner with its incredible line-up of top industry speakers, stellar programs, screenings, and… did we mention… food?! Well, the food isn’t actually part of the event, but it will surround the festivities in a warm embrace, because after all, it’s in ITALY! And you can get a mean Cappuccino in the foyer of the OGR conference site.

Next week, from October 16-21, Torino is the place to be – but don’t be fraught if you can’t make it. The event organizers have shared a late development - thanks to the last-minute support of a generous sponsor, the program will be available to Livestream for FREE – register here.

The full program for the conference’s VIEWFest film festival, which runs October 14-16, is now available here. It will include special screenings of ONI, My Father’s Dragon, and SIGGRAPH’s Computer Animation Festival, among other offerings of interest in English and Italian.

This year’s conference will see most speakers return to attend in person, with professionals, students, and enthusiasts also encouraged to attend the event onsite. The OGR, Torino’s modern venue, will house a program of talks, presentations, workshops, and masterclasses in what promises to be a vibrant and inclusive atmosphere. In addition, attendees will have an opportunity to meet leading filmmakers, artists, and visionaries for an inspiring exchange of ideas and experiences, whether onsite or online.

The Recruitment Fair is on-site at OGR in Corso Castelfidardo 22, Torino, Italy, from October 17-21.

The latest announcements and highlights:

A look at what’s to come:

The conference will welcome an array of speakers, including:

Presenting cutting-edge innovations in visual effects and virtual production are:

With offerings too numerous to list – head over to the VIEW 2022 website to see the latest program updates, register, and get the low down on Italy’s premiere event coming next week in Torino, Italy.