VFX house creates campaign and 3-minute anthem film that showcases its ‘sales reel’ from 1981 complete with fictional relics from the past. 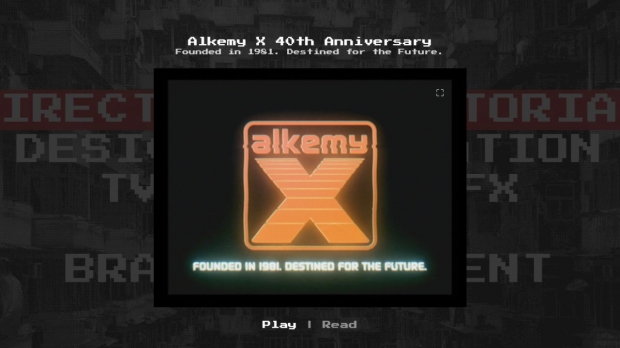 Alkemy X is celebrating its 40th anniversary by temporarily rebranding back to a 1981 version of itself in a playful re-imagining of its launch. The campaign includes a temporary throwback to the 1980s logo, a website reskin, a host of social posts and as a campaign centerpiece, a 3-minute anthem film.

The anthem spot is a recently ‘discovered’ sales reel from the studio’s launch, featuring all the company’s ‘cutting edge’ work on some hilarious (fictional) 80s films, TV shows and commercials. To top it all off, the film is hosted by the company’s largest investor, an iconic actress and 80s soap opera royalty. While the Alkemy X team lovingly pokes fun at dated visual effects, its 1981 era starlet was painstakingly recreated using the very latest deep fake AI technology.

“Coming out of the upheaval caused by Covid, the anniversary gave us all something fun to pull together around and create something as a company purely for the love of doing what we do,” shared Alkemy X president and CEO Justin Wineburgh.

"While the anthem film allowed our artists to run riot, playfully paying homage to techniques used in the early 80s, it also showcases the dynamic collaboration between the different divisions within Alkemy X and the innovation of our VFX team through the use of the latest AI technology to create our deep fake," added Alkemy X executive creative director Rupert Cresswell.

What started in April 1981 as a post house run out of a garage in the suburbs of Philadelphia has evolved into a global, award-winning leader in entertainment, advertising, and marketing, with credits including top Emmy-nominated and Emmy-winning titles such as Fear the Walking Dead and The Marvelous Mrs. Maisel. As Alkemy X celebrates its 40th anniversary, its team is spread across studios in New York, Los Angeles, Philadelphia, and Amsterdam, and continues to expand with a presence now in two new key markets: Singapore and Toronto.