Studio names Jeff Hipolito head of IT, VFX, while Jimmy Smith joins as a VFX compositor. 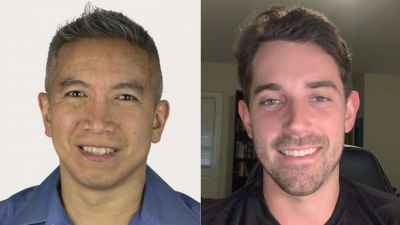 Alkemy X has added Jeff Hipolito as head of IT, VFX and Jimmy Smith as a VFX compositor, to their visual effects team. Hipolito and Smith will join the lineup of VFX talent led by VFX creative director Jep Hill and executive producer Mark Miller. The hiring follows the company’s significant growth in Los Angeles, along with recent expansions to Singapore, Vancouver, and Toronto.

With over two decades of IT and VFX experience, Hipolito has most recently worked creating and optimizing software systems and privacy protocols for VFX companies. Smith most recently working as a compositor at another VFX house and brings experience in editing and production.

"As our award-winning visual effects team is constantly embracing new technologies, processes and workflows to elevate visuals on projects of all scopes and sizes, security and privacy are as important to us as remaining at the top of our craft," noted Alkemy X president & CEO Justin Wineburgh. “Jeff is a key addition to our team that will allow us to continue to take our VFX to the next level. And Jimmy fits squarely within our strategy to ensure the absolute best artistic talent on our already incredibly deep bench.”

Originally from Australia, Hipolito’s journey into IT was largely self-taught. He gained additional experience in various financial industry roles before refocusing on VFX. In the VFX space he has worked for several studios in IT needs for post-production. He is a graduate of NYU Film School, and holds an Associate’s Degree from CUNY in Multimedia Programming.

Smith started off as an editing intern at Troma Entertainment, which started his career in the film industry. A graduate of CUNY in Visual Effects, and Arts University Bournemouth, he is skilled in managing, editing, and compositing. In his most recent position, he moved from intern to compositor in just three years, lending his talents on top series including the Netflix documentary Colin in Black & White and the Fox procedural drama 9-1-1.

The company’s current credits include work on Westworld, The Marvelous Mrs. Maisel, Fear the Walking Dead, and The Gilded Age.