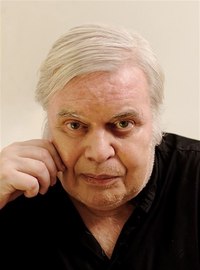 Swiss surrealist artist H.R. Giger who designed the monster and revolutionary sci-fi sets for the film Alien has died, according to a report by Reuters. He was 74.

Giger, who was born Hans Rudolf in the eastern Swiss town of Chur in 1940, died on Monday in Zurich from injuries he obtained after suffering a fall, an employee of the H.R. Giger Museum said, confirming reports in Swiss media.

Famous for creating the otherworldly creature in Ridley Scott's 1979 horror film Alien, Giger was awarded an Oscar for Best Achievement in Visual Effects in 1980.

The son of a chemist, he studied architecture and industrial design in Zurich, and first experimented with ink drawing and polyester works before moving onto large freehand airbrush works showcasing nightmarish dreamscapes.

His work explored the relationship between the human body and the machine, and he created surrealist images of humans fused with industrial parts, a style he described as “biomechanical.”

Giger was also known for his sculptures, paintings and furniture and many of these works are on display at his own museum in a medieval castle in Gruyeres, central Switzerland, which is run by his wife Carmen Maria Scheifele Giger. The museum, which opened in 1998 also houses Giger's private art collection, including works by Salvador Dali.