Inspired by the filmmaker’s own unorthodox upbringing, this NFB-produced tale of a neurotic mother-daughter relationship features the voice talents of Amanda Plummer. 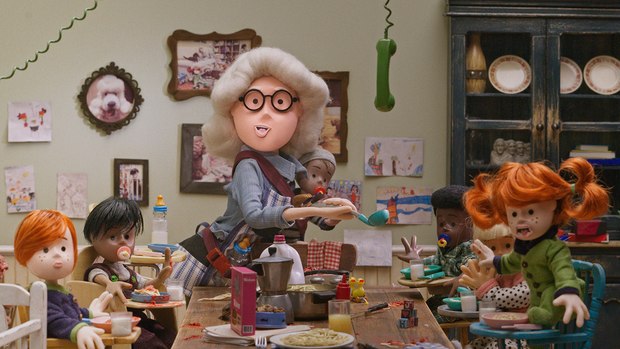 MONTREAL -- We all have complicated relationships with our families -- luckily for animator Alexandra Lemay, she’s been able to turn that into comedy gold with her new National Film Board of Canada stop-motion short Freaks of Nurture, making its world premiere June 21 at the 24th annual Palm Springs International ShortFest.

Freaks of Nurture is a six-and-a-half-minute film about a neurotic mother-daughter relationship inspired by the filmmaker’s own unorthodox upbringing with her single-parent mom, who is also a foster parent and dog breeder. Playful and self-deprecating, the film reveals much about what it means to grow up, become independent, but still crave the love and support of a parent.

Up against a tight deadline and desperate to vent, a young filmmaker calls her mother (voiced by Emmy and Tony award winner Amanda Plummer) in search of support. Her mother, raising her biological children along with a handful of foster kids and adopting any animal that crosses her path, is literally stretched to her limits -- and in utter denial about it. The daughter’s work-related stress quickly turns to annoyance as her saintly mother, seemingly comfortable within her self-inflicted chaos, is clearly in over her head. What follows is a relatable conversation of miscommunication fueled by sitcom humor and a punk-rock attitude.

Lemay brings her stop-motion characters to life against exquisitely crafted sets, featuring enchanting details that pull you into each scene. Told with a healthy dose of off-beat comedy, clever nods to pop culture and the occasional breaking of the fourth wall, her story captures the complex relationships that exist among all families.

Freaks of Nurture was written by Alexandra Lemay and Julie Matlin, with music by Judith Gruber-Stitzer. The film is produced by Maral Mohammadian and executive produced by Michael Fukushima for the NFB’s Academy Award-winning Animation Studio in Montreal.