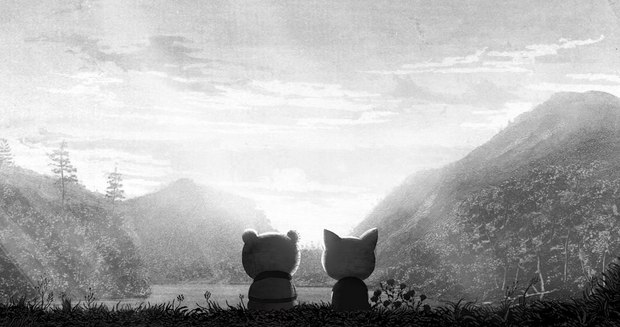 Decorado, the animated short film from Spanish director, illustrator and cartoonist Alberto Vázquez, is set to screen as part of the Director’s Fortnight official short film competition at the Festival de Cannes 2016 currently underway in France.

The hand-drawn, black-and-white short film is a co-production of UniKo in Bilbao, Spain, and French studio Autour de Minuit, which is also handling international distribution, and is based on a simple, yet profound, premise: the world is a marvelous theatre, but the casting is deplorable.

Decorado will screen at the Croisette theater in Cannes on May 20. Check out the trailer in the player below:

Vázquez’s books and comics have been published throughout Spain, France, Italy, Brazil and Korea, and as a press illustrator he has published regularly in magazines like ELPAIS, La Voz de Galicia, Vanity Fair, Communication Arts and the Boston Globe magazine.

The filmmaker’s previous work, much of it based on his comics, includes the Goya-nominated Birdboy, which was also nominated for the Cristal at Annecy in 2011, and Unicorn Blood, which was nominated for numerous awards and received the prestigious Goya Award for best animated short film in 2012. Vázquez’s work has been shown at festivals around the world including Annecy, Clermond-Ferrand, Animafest Zagreb and Slamdance, and he has won more than 60 awards in international events including the Festival of Chicago, Foyle, Silver Meliés, and Expotoon.

Vázquez just completed his first feature film, Psychonauts: The Forgotten Children (Psiconautas), based on his graphic novel of the same name and co-directed with Pedro Rivero. Produced by Zircozine and Basque Films, and distributed by Autour de Minuit, Psychonauts will screen in June as an official selection at Annecy.