Creative studio teams up with McCann Detroit to produce a comedic, VFX-driven narrative featuring the return of Mike Myers’ Dr. Evil; created for the car maker’s Super Bowl LVI campaign, the spot paid homage to the iconic 1990’s spymaster spoof while dealing with topical issues of climate and reduced emissions. 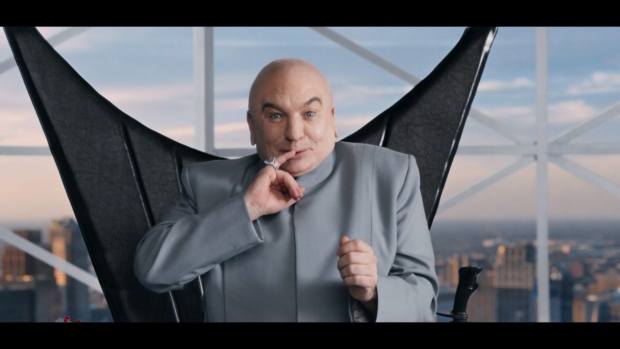 The villainous mastermind with the indelible iron pinkie and cheeky smirk returned in General Motors’ EVil is Back for Good Super Bowl LVI campaign, as the infamous Dr. Evil from the classic Austin Powers films is now “back for good.” The automaker tapped the talents of AFX Creative to herald the return of actor/comedian Mike Myers’ iconic series and character after two decades.

According to AFX executive producer Nicole Fina, the studio’s input increased as the production went on, conveying just how pivotal AFX’s role became during the creative process.

Check out the spot:

EVil Is Back For Good:

“This campaign started off with select VFX needs and grew to include VFX in every single shot,” explained Fina. “We created the floor, the ceiling, a fleet of CG cars, CG stairs, animating robots, tricked-out walls, multi-leveled floors, backgrounds and so much more. I loved that AFX was able to showcase all sides of our post-production prowess on this campaign, from on-set supervision and VFX to final color and finishing.”

AFX colorist Derek Hansen was tasked with both paying homage to the 1990’s film classic while also giving consideration to the serious topic of climate.

“We wanted to hold in tension the forbidding feeling of Dr. Evil’s lair and the warm lightheartedness of Mike Myers’ comedic genius,” noted Hansen. “In the end, what we came up with was a really beautiful contrast between the warm sun, setting below the skyline, and the cool lair interior.”

For AFX creative director Chris Noellert, GM’s Austin Powers revival highlights the impact visual effects can have in driving the storytelling of a campaign, especially one filled with so many intricate details, hijinks, and moving parts. “First and foremost, this is a comedy piece, [but] we still manage to traverse the full gamut of visual effects,” explained Noellert. “We’ve got CG cars and helicopters, shark-mechs, F-bombs, and friggin’ lasers. We created Dr. Evil’s lair and crafted a focus group testing room complete with collapsible walls and rotating TVs all out of nothing. In the end, even though the pixels we spun for this spot are sometimes making up 90% of what you see on screen, they are all still only in service to the brilliant comedic to-and-fro playing out between Mike Meyers and the rest of the cast. We’re in a supporting role, but it’s nice that we do get a few stand-out moments like Baby-Me and the weapons in the lair. Even then, it’s still all about the laughs.”

The Super Bowl spot was another collaboration between AFX, McCann, and General Motors, building on a history of work on past GM campaigns, including last year’s “Everybody In” campaign, which marked GM’s efforts to accelerate mass adoption of electric vehicles and realize its vision of a zero-emission future.

Noellert shared that like most AFX collaborations, the process for this campaign was fluid, and everyone from the brand and talent on down was enthused about the ideas and their potential.

“The agency did a great job of ingesting a massive amount of feedback from everyone at GM to Mike Myers to their own internal creative team and molding all of that input into a creative fire-hose,” recalled Noellert. “Any given day, there would be something new to discuss - some nugget of crazy-Dr. Evil-ness to explore, and in that way, I really feel like McCann saw us as their partners in crime. We would sketch and spitball and render and refine. It’s exhausting and rewarding all at once, and in the end, you’re left with this amazing feeling of having not only crafted a spot but of having really left it all out there.” “A single commercial consists of multiple shots that are composed of a variety of elements,” explained Connors. “The key is knowing how to manage the project in a manner that maximizes efficiency by understanding your team skills and executing the project in the time allowed. Often in this process, the client expects their product to appear authentic to the human eye when actually it is a photoreal representation. The process of photorealism is time-consuming and requires additional planning; however, the results are absolutely stunning.”