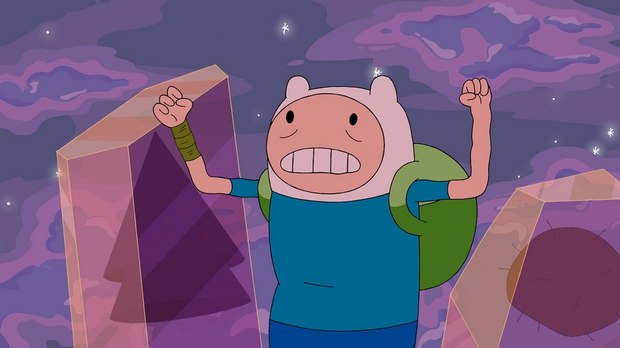 Anchoring Cartoon Network’s award-winning line-up of original animated comedies (Mondays, 6-8 p.m.), the Adventure Time Season 6 premiere grew by double and triple digits—from 41% to 164%—across all targeted kids and boys demos vs. key benchmarks, including lead-in, the prior week, the previous week and the same time period last year. It also landed as the #1 telecast of the day among all kids 2-11, 6-11 & 9-14 and all targeted boy demos. Similarly to the network overall, Adventure Time beat the kids competition by double, triple and quadruple digits across all demos, ranging between 61% and 2033%.

Adventure Time introduces viewers to unlikely heroes Finn and Jake, buddies who traverse the mystical Land of Ooo and encounter its colorful inhabitants. The best of friends, our heroes always find themselves in the middle of heart-pounding escapades. Finn, a silly kid with an awesome hat and Jake, a brassy dog with a big kind heart, depend on each other through thick and thin. From the mind of first-time series creator Pendleton Ward and Cartoon Network Studios, Ooo is a land built for adventure.

In one week over 14 million fans tune into Adventure Time, Cartoon Network’s Emmy award-winning original animated series. Adventure Time has received numerous entertainment award citations over the years including the prestigious BAFTA (British Academy of Film and Television Arts) Awards and last year was nominated for its fourth Primetime Emmy Award for Outstanding Short-format Animated Program as well as a 2013 Critics’ Choice Television Award for Best Animated Series. “Thank You” a film by the Adventure Time team and Cartoon Network Studios was accepted into the 2013 Sundance Film Festival Shorts Film Program. Adventure Time, has grown in retail with its own apparel and accessories line, toys and games, comic books, interactive, home-video and even toys in McDonald’s Happy Meals. Adventure Time amazed millions last fall when the shows stars, Finn and Jake took their place among the legends, flying down the storied route of the 87th Annual Macy’s Thanksgiving Day Parade.