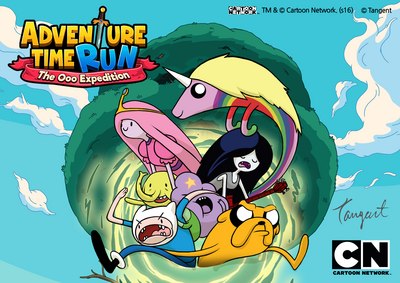 SEOUL, KOREA -- Turner Asia Pacific will launch a new app called Adventure Time Run: The Ooo Expedition, created by game developer Tangent. It is the first time a Cartoon Network IP has been used as the complete landscape for a Korean-produced game. The release will first take place in Korea on September 21, with a regional rollout across Asia later in 2016, and finally in selected international markets in 2017.

The game focuses on the main characters Finn and Jake from Cartoon Network's global hit animated series Adventure Time, but also references the shows Princess Bubblegum, Marceline the Vampire Queen and BMO, who all reside in the dreamlike Land of Ooo and have a huge fanbase. The "run-style" gameplay adopts an innovative character nurturing system and has social media integration with linked ranking ability.

“This game is the first of a kind,” commented Ron Lee, General Manager of Turner Korea. “Korea's gaming industry is hungry for new IP that can provide a global competitive edge, and Turner and Cartoon Network IPs already have a track record of popularity internationally. Turner will be looking to secure further business with Korea's talented pool of game developers and partners. And through partnerships such as the one with Tangent, we will be actively growing our digital offerings in this market."

Cartoon Network original IPs that will be prioritized in Korea are also The Powerpuff Girls, Ben 10 and We Bare Bears.

Tangent's CEO, Ben Byung-Eui Yoo, added, “We expect Adventure Time Run: The Ooo Expedition to garner a lot of interest from gaming fans in Korea. Adventure Time is a series with a solid base of fans both overseas and within Korea, and its diverse and unique world is a great environment for the project. As it is a game with a globally popular IP, we are confident that the game will find success not only in Korea but also in the global market.”

Adventure Time Run: The Ooo Expedition is now available for download on mobile devices from the Google Play Store and the App Store.