Based on the animated series by Pendleton Ward, the fourth and final ‘Adventure Time: Distant Lands’ special explores the backstory of mild-mannered occultist and loyal Princess Bubblegum assistant Peppermint Butler. 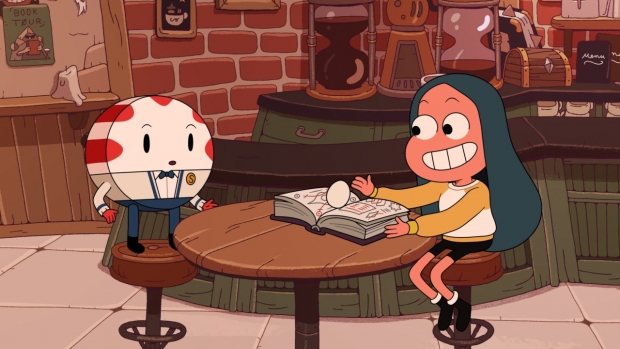 Premiering today on HBO Max, the fourth and final Adventure Time: Distant Lands special, “Wizard City,” follows Peppermint Butler as he starts a new life as just another inexperienced wizard school student. But when mysterious events around campus cast suspicion on Pep and his checkered past, can he master the mystic arts in time to prove his innocence?

Is this the true Candyman? You may think you know Peppermint Butler (aka Pep-But, Peps, or even Dark One), the mild-mannered loyal assistant to Princess Bubblegum... but do you really know him? There's more to this red-and-white bowtie clad master occultist than meets the eye: discover his magical backstory and explore the lore of Wizard City.

Based on the animated series Adventure Time created by Pendleton Ward, executive produced by Adam Muto and produced by Cartoon Network Studios, the Adventure Time: Distant Lands specials explore the unseen corners of the world with characters both familiar and brand new. Last year, the first of these specials, BMO, followed the lovable little robot on a new adventure to the farthest reaches of the galaxy. The second special, Obsidian, centered on Marceline the Vampire Queen and Princess Bubblegum as they confronted their rocky past to face off against an ancient foe.  The third, Together Again, saw Finn the Human and Jake the Dog reunite to embark on the most important adventure of their lives.

And for all you Adventure Time fans, Fionna and Cake are coming back into our lives bigtime, as HBO Max just last month gave the thumbs up to a brand-new animated series, Adventure Time: Fionna & Cake (working title), the next chapter in the franchise. The new half-hour young adult animated show will star the fearless sword-wielding adventurer, Fionna, and her magical best friend and talking cat, Cake. Produced by Cartoon Network Studios, the 10-episode series will explore their relationship and the mysterious land of Ooo. Adam Muto (Adventure Time, Adventure Time: Distant Lands specials) will serve as showrunner and executive producer.

In the series, Fionna and Cake – with the help of the former Ice King, Simon Petrikov - embark on a multiverse- hopping adventure and journey of self-discovery. All while lurking in the shadow, a powerful new antagonist is determined to track them down and erase them from existence.