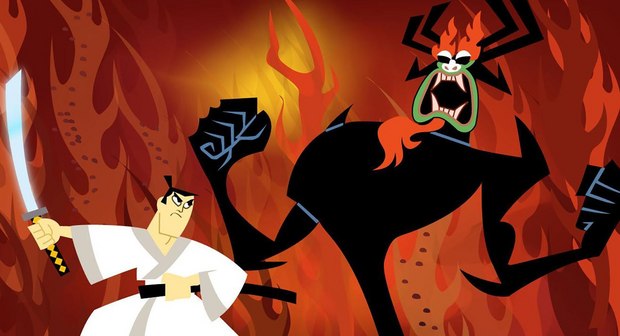 ATLANTA, GA -- Following the epic conclusion of its fifth and final season, Adult Swim's four-time Emmy Award-winning series, Samurai Jack, arrives as a complete series on Blu-ray October 17, 2017. Featuring all 62 heart-pounding episodes of the critically acclaimed animated show, Samurai Jack: The Complete Series also arrives with action-packed bonus content, including exclusive featurettes, behind the scenes looks and special commentary. Fans will also relive the first four seasons in HD for the first time as each episode has been remastered to perfection. The box set also features a one-of-a-kind metal art print, created especially for the show's devoted fans. Adult Swim isn't stopping there. In addition to the release of Samurai Jack: The Complete Series, fans can celebrate even more of their favorite Samurai with a dynamic lineup of additional releases featuring new content from the beloved series. Providing fans an entertainment experience like no other, Adult Swim's full lineup of action-packed upcoming releases includes:

Created by celebrated animation director Genndy Tartakovsky, Samurai Jack follows a young Samurai after he is sent to the future by the evil wizard, Aku. With the determination to defeat the wizard and undo his destruction, Jack sets off on a daring journey to return to the past and defeat Aku once and for all. Gathering allies and combatting other villains along the way, Jack battles to accomplish his mission and restore the peace of the past. The intense Fifth Season concludes the journey of its time displaced iconic star, as he finally completes his mission 50 years after the events of the original series.

Continuing to captivate new fans, while maintaining a loyal following of longtime viewers, Samurai Jack: The Complete Series allows audiences to join their favorite samurai time and time again as he finds his way through the five-season journey.