A new U.S. trailer is released for Space Dandy, the new anime series from the creative team behind Cowboy Bebop. 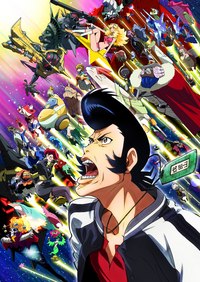 Here’s a U.S. trailer for Space Dandy, the new anime series from the creative team behind Cowboy Bebop.

The story revolves around alien hunter Dandy (voiced by Ian Sinclair). His job is to seek out new aliens never seen before, receiving a reward whenever he finds a new species. As he travels the galaxy, his mission is to find those new species faster than anyone else. Together with the bucket-of-bolts robot QT and the dimwit alien Meow picked up along the way, he comes into contact with new planets and their inhabitants. And did we mention the boobies? There are LOTS of boobies.

The promo is for Adult Swim’s Toonami block, which will debut the new series on January 4. Check it out, below: