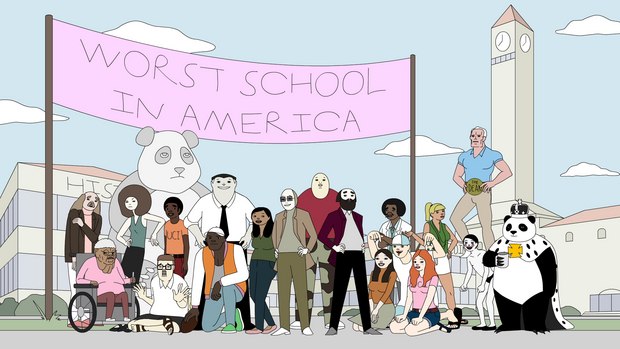 Class is officially back in session at the University of China, IL, the worst college in America. China, IL will return in April with more laughs, more absurd situations and a less education than ever! In its third season, the faculty will continue to provide absolutely no instructive growth for the University’s students, thus prolonging both graduation and our delight in the chance to drink in the all-new half-hour episodes debuting on Sunday, April 5th at 11:30 p.m. (ET/PT) on Adult Swim.

The animated series is about history professors and brothers, Frank and Steve Smith, their TA Pony Merks, and a giant man-child named Baby Cakes, who may or may not even be a student at the school.

In the third installment of China, IL, watch as Baby Cakes struggles with his identity; humanities fate rests on Pony; a murder of crows are hired as professors; Frank's anus becomes a popular stand-up comedian; Frank, Steve, Pony, and Baby Cakes become life coaches for one another in order to not be like Chris Brown; and Donald Trump's son enrolls at UCI.  We will also finally meet Baby Cakes’ mom, and Steve and Frank’s parents, as well as be treated to a special hour-long musical episode where Baby Cakes demands that he get a magical pet, like all other Disney Princesses.

China, IL is created by Brad Neely. Neely and Daniel Weidenfeld serve as executive producers. The show is also produced by Dave Newberg at Titmouse, Inc.