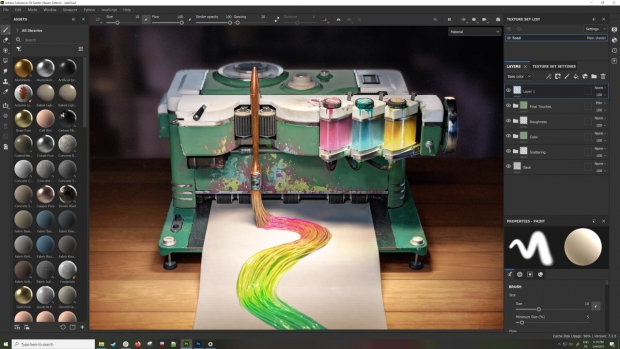 Adobe this morning has announced the immediate availability of Adobe Substance 3D, a new collection of interoperable 3D tools and services designed to streamline and support the 3D design process.

According to Scott Belsky, chief product officer and executive vice president, Creative Cloud, “When the pandemic made getting together for photo shoots and other creative projects impossible, companies turned to 3D to create. These companies and thousands of others discovered that creating in 3D not only gave them incredible creative freedom, but that it was also faster, cheaper, more scalable, and more sustainable. Fortunately, the pandemic won’t be with us forever, but 3D creativity certainly will. 3D is the next generation of creativity.”

The announcement marks the culmination of years of considerable Adobe investment in 3D and immersive tools that included acquisitions of Allegorithmic and Medium, as well as the recent hiring of Pixar veteran Guido Quaroni as Senior Director of Engineering on the 3D & Immersive Team.

Adobe Substance 3D’s AI-based engine eliminates much of the technical complexity of 3D design; the WYSIWYG interface will feel familiar to Photoshop or Illustrator artists. The collection also includes access to thousands of models, textures, lighting systems, and other assets that can help jump-start projects.

“The team’s goal was to build tools that are easy to learn, but impossible to outgrow, so that there are no limits to your creativity,” Belsky noted. “Substance 3D provides the cutting-edge technology that veteran 3D artists require, while making the medium accessible for new 3D enthusiasts. It uses the power of artificial intelligence to eliminate much of the technical complexity of 3D design and features the ‘what you see is what you get’ interface artists are familiar with from Photoshop or Illustrator.”

Built on the foundation established by Adobe Dimension, Stager lets you easily assemble models, materials, and lighting in a 3D scene and produce stunning virtual photographs and renderings.

Often called the Photoshop of 3D, Painter allows you to apply textures to a 3D object. Those detailed and infinitely customizable textures are key to making 3D objects seem so realistic that you can imagine reaching out and touching them.

Sampler (built on the foundation of Substance Alchemist) makes creating materials simple. You can bring in a photo and quickly apply filters and mix elements to produce a texture or other material in a matter of minutes.

With Designer, you can create your own customizable textures, materials, and even 3D models from scratch.

Adobe’s content team has created thousands of customizable 3D assets, including models, lights, and materials. The models include everything from a rusty screwdriver to an airplane cabin wall and cover all sorts of uses, from fashion and automobile design to architecture and games – everything needed to get a head start on a project. Artists will also be able to see how the assets were made so they can apply the same techniques to their own creations.

The company has also opened a private beta of Substance 3D Modeler, a modeling tool that allows artists to create their own 3D objects. Modeler uses a VR interface to recreate the natural, organic feeling of sculpting clay with your hands, leveraging the precision of mouse and tablet controls.