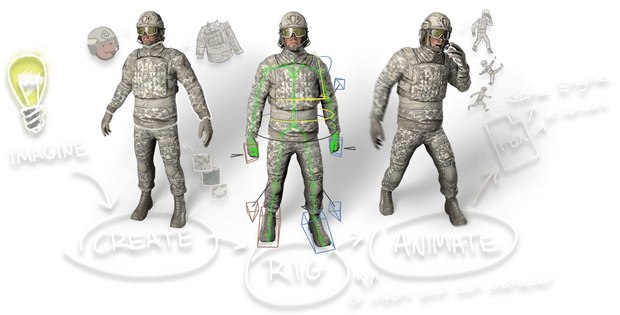 Adobe has had its eye on 3D for years, and while 3D content creation features have long been part of Photoshop, it still presents challenging terrain for designers. Adobe is hoping to advance ease of use in 3D workflows with the new acquisition.

Here is the news according to a blog post by Winston Hendrickson, Adobe’s vice president of digital imaging products:

3D tools have come a long way in the past few years, but are still generally inaccessible to most designers due to the great expense and extensive training required to learn the complicated techniques. However, using 3D in 2D workflows adds flexibility to the design work you’re already doing and delivers better output options for interactive websites, game content, video and 3D printing. Our research tells us that one of the most in-demand skills for designers is 3D, but using it is just too hard with the current tools and technology. We’ve been working to close this gap between power and usability, which started last year when we announced some exciting new features in Adobe Photoshop CC that make 3D compositing and printing much easier.

Today, we’re taking another step toward unlocking the power of 3D for designers by announcing the acquisition of Mixamo, a San Francisco based company that enables designers to create and customize a broad range of high quality 3D characters and animations, which provide significant benefits for the design community:

Designers are currently using Photoshop CC to produce a wide variety of 3D outputs, but we will increase what you can do with Photoshop CC and 3D content while making it easier for more people to take advantage of those benefits. We plan to integrate Mixamo’s technology into Photoshop CC to empower designers to create, customize, manipulate, rig and animate 3D content, as well as to take advantage of tens of thousands of high quality, turnkey 3D models, starting with stock characters that can be easily pulled into projects.

Designers are increasingly being asked to create photo-realistic scenes that don’t exist in the real world. And while this is already being done in Photoshop CC today, we can push the envelope further to enable a level of precision like never before, and to make it easier for everyone to use. This is because there is a confluence of changes in 3D technologies that will make this much easier in the near future. First, the emergence of 3D scanning technology will drive demand for readily available, high quality 3D content. Second, hardware improvements make it much easier to work with 3D content on standard devices, even tablets. Finally, we see a marriage of high quality content and powerful tools geared toward graphic designers that make working with 3D more accessible than ever before. Mixamo helps us address these market demands and the current challenges of working with 3D.

Hendrickson’s post notes that characters are one of the biggest growth categories of 3D content, with many interesting use cases for graphic design. Here is a video made by using Photoshop CC to composite a rigged and animated character from Mixamo onto an image: